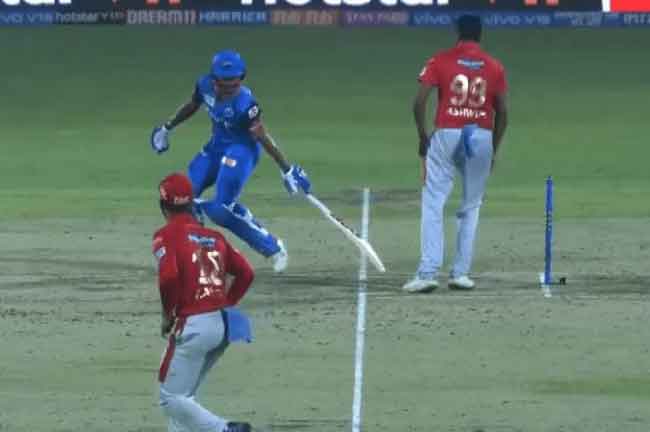 Kings XI Punjab (KXIP) skipper R Ashwin was at the receiving end of Shikhar Dhawan’s mocking when the off-spinner tried to ‘Mankad’ the Delhi Capitals (DC) batsman during the game in the ongoing Indian Premier League (IPL) edition at the Feroz Shah Kotla.

The Punjab-based franchise lost the match on Saturday night here by five wickets after Delhi chased down the 164-run target with two balls to spare.

During the 13th over of the chase, Ashwin, who was about to deliver his second delivery, stopped mid-way through his run-up, retraced back and looked towards Dhawan, who was looking to move out of his crease. As the off-spinner went back to take his run-up, the Delhi opener sat down on one knee and looked at Ashwin.

However, what happened after that was something which left the viewers in splits. As Ashwin bowled the delivery to Shreyas Iyer, Dhawan taunted the KXIP skipper by shaking with his bat rooted inside the crease and showing his dance moves. He suggested that he was going out of the crease but his bat was inside all along.

The official handle of the IPL uploaded the image on Twitter and their post read: “Shikhar’s dance moves on the crease.”

Ashwin had earlier dismissed Rajasthan Royal’s Jos Buttler using the controversial method for which he faced flak from many in the cricket fraternity.

However, he maintained that whatever he did was “within the rules of the game”.

Since then, many batsman, including Sunrisers Hyderabad’s David Warner, have remained extra cautious whenever the off-spinner comes to bowl.  (Agency)