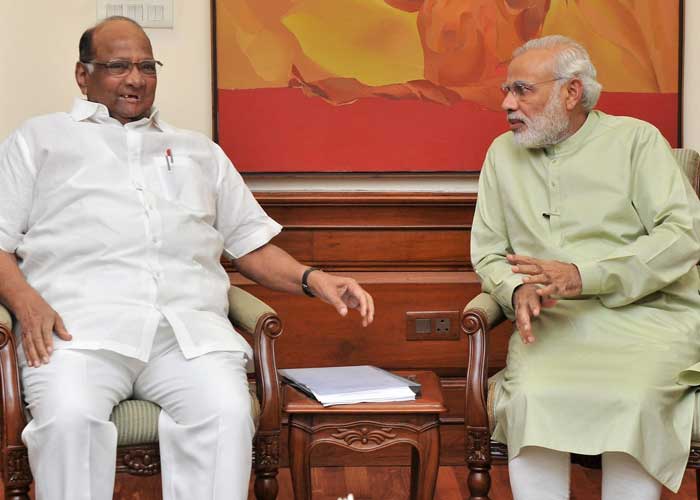 Mumbai, Oct 13, 2020-
Nationalist Congress Party President Sharad Pawar on Tuesday said he was “shocked and surprised” with the “kind of language” used by Maharashtra Governor Bhagat Singh Koshyari in his letter to Chief Minister Uddhav Thackeray this morning.

Shooting off a letter directly to Prime Minister Narendra Modi, Pawar said that he was in agreement with the Governor to have his independent views and opinions on the issue of reopening of religious places, but simultaneously the Maratha strongman also threw his weight behind Thackeray.

The fast-paced developments came a day after a Shiv Sena leader Kishore Tiwari wrote a letter to the Governor accusing Bharatiya Janata Party (BJP) Leader of Opposition Devendra Fadnavis of violating the Oath of Office and Secrecy by revealing details of the Aarey Colony project, and demanded he should sacked from the post.

“I also appreciate the prerogative of the Governor to convey his views to the CM. However, I am shocked and surprised to see the letter of the Governor and the kind of language used (in it),” Pawar informed Modi, even as the Maha Vikas Aghadi allies Shiv Sena-NCP-Congress stood rock-solid behind Thackeray.

Quoting some of the statements by Koshyari in his letter to Thackeray, Pawar pointed out to Modi the “intemperate language” used therein, and which “invokes the connotation” as if written to the leader of a political party.

“In the very Preamble of our Constitution, the word ‘Secular’ is added that equates and shields all religions, and hence (the Chair) of the Chief Minister must uphold such tenets of the Constitution,” Pawar pointed out.

He added that the CM was left with no options but to release his reply to the Governor, though he had not spoken with either of the state’s two top Constitutional dignitaries.

“I thought I must share my pain with you and the public at the erosion of standards of conduct of the high Constitutional office of the Hon. Governor,” said Pawar.

In the letter, making a case for permitting people to worship in temples — closed since the lockdown was clamped on March 23 — Governor Koshyari had asked a pointed question to Thackeray: “You have been a strong votary of Hindutva… Have you turned ‘secular’ yourself, the term which you hated?”

Congress state President and Revenue Minister Balasaheb Thorat said that the Governor’s language which was against the Constitution would be acceptable to the President of India.

“Moreover, a similar situation is there even in Goa, then why the Governor has not issued such a letter to reopen the places of worship there,” Thorat demanded.

NCP President and Water Resources Minister Jayant Patil pointed out that there’s a possibility of a second wave of Coronavirus in November which could pose a further risk of infections spreading.

“Religious leaders of all faiths have accepted that people must remain safe, and so any measures in this regard would be taken with utmost precautions,” Patil asserted.

Top leaders of Sena including Chief Spokesperson Sanjay Raut, Arvind Sawant (both MPs), several ministers and leaders also attacked the BJP and the language in the Governor’s letter.

“Comparing temples with bars is not proper…the PM said even today that the Corona threat has not been fully averted in Maharashtra. When the PM is so much concerned about the situation here, then the Governor should also think about it,” Raut said.

Tiwari — who is accorded a Ministerial status — has demanded that President R.N. Kovind should sack Koshyari “who has insulted the CM” and engaged in mudslinging in pandemic times, maligned the office of Governor besides running the “BJP agenda”, while Awami Party leader Shamsher Khan Pathan urged the President to dismiss the Governor immediately.

Several top BJP leaders lambasted Thackeray and supported Koshyari, among them Fadnavis, Leader of Opposition in Council Pravin Darekar, and State party chief Chandrakant Patil who said that “bars and wine shops have been permitted to reopen, but not temples”.

Koshyari’s letter to Thackeray this morning sparked off a major political row in the state though the CM indicated that he would not be cowed down and the government would consider the (Governor’s) request seriously and take an appropriate decision soon with all Covid precautions.

As the controversy raged, the BJP along with seers and saints organised protests outside all prominent temples in the state including the famed Siddhivinayak Temple in Mumbai and the Saibaba Temple in Shirdi (Ahmednagar), demanding they be reopened for worship.  (Agency)