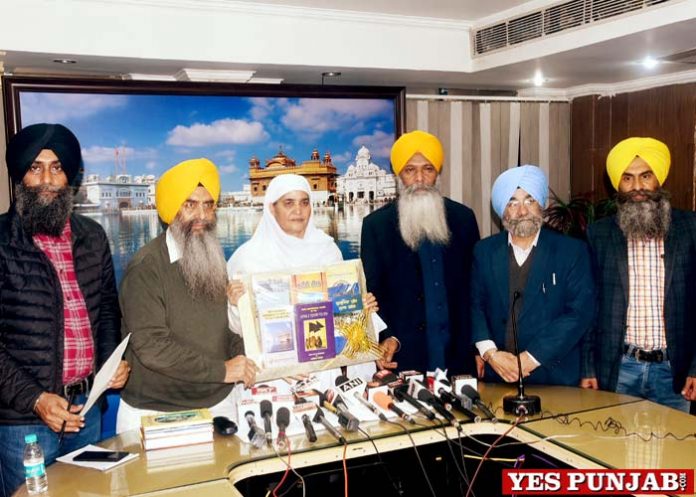 Amritsar, February 19, 2021 (Yes Punjab News)
After the Government of India (GOI) stopped the Jatha of pilgrims going to Pakistan on the occasion of first centenary of Saka Nankana Sahib, Shiromani Gurdwara Parbandhak Committee (SGPC) president Bibi Jagir Kaur on Friday re-wrote a letter to Prime Minister Narendra Modi and Home Minister Amit Shah and sent a set of books on the sacrificial history of the Sikh community.

Bibi Jagir Kaur wrote in her letter that Sikhs laid the foundation of freedom of the country through sacrifices but the GOI is discriminating against Sikhs.

Bibi Jagir Kaur said that the Government of India should still understand the sentiments of the Sikhs and allow the sangat to be a part of the event on February 21.

Addressing a press conference at the SGPC office in Amritsar, Bibi Jagir Kaur said, “There is a huge outcry in the Sikh community over the government’s decision to stop the participation of Jatha in the centenary events of Saka Nankana Sahib. After the bloody massacre at Jallianwala Bagh, the Nankana Sahib massacre had shocked the people of the world. This incident laid the foundation of the country’s independence, after which even Mahatma Gandhi had to say that half of the country’s freedom struggle had been won.”

“By ignoring the history of Sikhs, the Government of India has stopped the Jatha going to mark and attend the centenary of Saka Nankana Sahib. This action of the Central Government is also an insult to the patriotic Sikh martyrs”, said Bibi Jagir Kaur.

Bibi Jagir Kaur said, “A set of books is being sent to the Prime Minister Shri Narendra Modi and Home Minister Amit Shah on the history of Sikhs who sacrificed their lives for the freedom of the country.

Along with these books, letters are also being sent to both the leaders informing them about the history of the incident. These letters and sets of books will be taken by the officials of the deputy secretary level of SGPC.

Talking about the purpose of sending these historical books, SGPC president Bibi Jagir Kaur said, “It was to make the Prime Minister and the Home Minister realize why it was important for the sangat to participate in the ceremonies taking place at the shrine of Guru Nanak Dev Ji in Pakistan on the occasion of the centenary of Saka Nankana Sahib.”