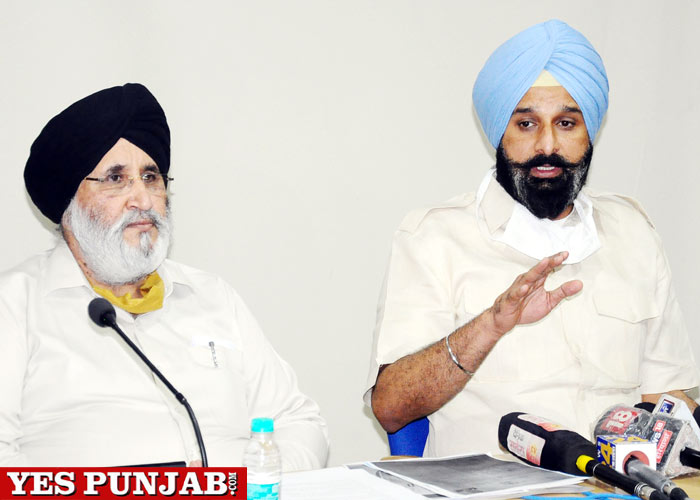 The Shiromani Akali Dal (SAD) today demanded the custodial interrogation of all those involved in the multi-crore Seed scam even as it castigated Cabinet minister Sukhjinder Singh Randhawa for acting as a spokesperson for the prime scam perpetrator – Karnal Agri Seeds and maintained only an independent probe into the entire issue could nail the culprits.

Addressing a press conference here, senior SAD leaders Bikram Singh Majithia and Dr Daljit Singh Cheema said it was unfortunate that even a fortnight after the scam came to light when the State Agriculture department registered a FIR against sale of spurious PR-128 and PR-129 seeds as well as fleecing of farmers no attempt had been made to raid facilities manufacturing and hoarding the spurious seeds.

“No arrests have been made in the case. It seems the government is giving time to the scamsters to wipe out all evidence and doctor their records. It is unfortunate that this is being done at the cost of farmers who will only be driven to suicide by such acts of utter callousness” The leaders made it clear that they had raised the issue only to safeguard the interest of farmers and would continue to do so till justice was meted in the case.

The leaders said since the government had failed to act in the matter and it also appeared that the proprietor of Karnal Seeds enjoyed political patronage, only a probe by the Central Bureau of Investigation (CBI) could bring out the truth.

They said Minister Sukhjinder Randhawa should not have any objection to this since he had made a show of welcoming an inquiry into the case even though he was trying to befool the people by remaining ambiguous about the nature of the inquiry.

The leaders said chief minister Capt Amarinder Singh should however accept this offer immediately and forward the case to the CBI for a thorough investigation.

Castigating the government for the delay in investigation in the case, Mr Majithia and Dr Cheema said it had sent out wrong signals that the government did not want the truth to come out. They said the manner in which the main suspect in the case – Lucky Dhillon was allowed to hold press conferences to clear his name had strengthened this belief further.

The leaders said it was even more shocking that Mr Sukhjinder Randhawa was acting like a ‘munim’ of Karnal Agri Seeds by showing bill receipts of the firm to the media. They said this was most unbecoming of a cabinet minister and said Randhawa should explain why he was trying to wash away the cheating and fleecing of farmers at the hands of Karnal Seeds and others involved in the Seed scam.

Giving further details, the leaders said breeder seed of PR-128 and PR-129 had been distributed in very small quantity to farmers in May 2020 and was not open for private sale even now. “No seed company has the authority to sell it”.

They said despite this Karnal Agri Seeds “manufactured” this seed in October 2019 and sold it in the market in collusion with Congressmen of Gurdaspur who issued statements urging farmers to purchase these new seeds. The leaders said despite this evidence of cheating being out in the open the State police had still not interrogated Lucky Dhillon to ask how he multiplied a huge amount of breeder seed so quickly.