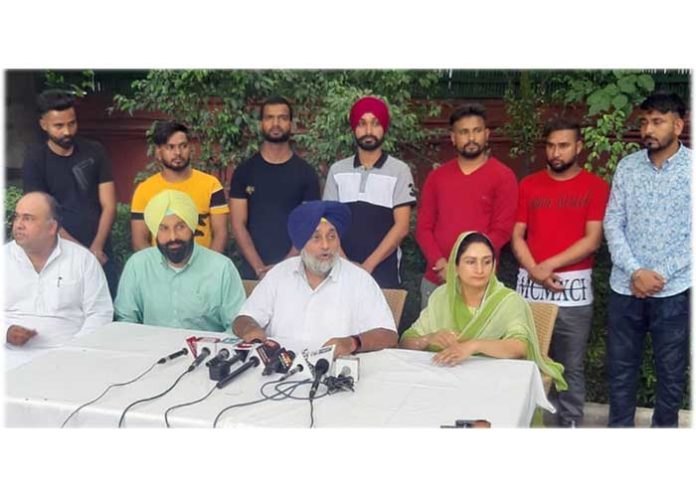 Shiromani Akali Dal (SAD) president Sukhbir Singh Badal today welcomed seven Punjabi youth on their homecoming from Iraq after being stranded there for eight months and asked the Punjab government to take action against rogue travel agents responsible for even enslavement of Punjabi girls sent abroad by them.

Addressing a press conference today in Delhi along with union food processing minister Harsimrat Kaur Badal and the senior party leadership, the SAD president thanked the External Affairs Ministry for directing the Erbil Consul General to intervene and take steps for the repatriation of the seven boys. He also expressed gratitude to SAD volunteers who paid for the homeward bound tickets of the youth.

Giving details, the SAD president said the youth had been promised a salary of $700 to $800 per month along with food and lodging facilities. He said however on reaching Iraq they found that they had been duped and that the agent had not taken the required permissions and they did not have any work contract. He said due to this the youth were denied employment and even subjected to a daily fine which accumulated to $14,000 in eight months.

The SAD president said with the intervention of the External Affairs ministry after Mrs Harsimrat Badal approached Dr Jaishankar, the Erbil Consul General got the issue resolved by prevailing upon the sponsor to pay the fine.

Mr Badal said the Punjab government should take strict action against all travel agents indulging in malpractice and said immediate steps should to be taken to repatriate all Punjabi women who had been sold in Iraq and other places after being sent on the pretext of work. 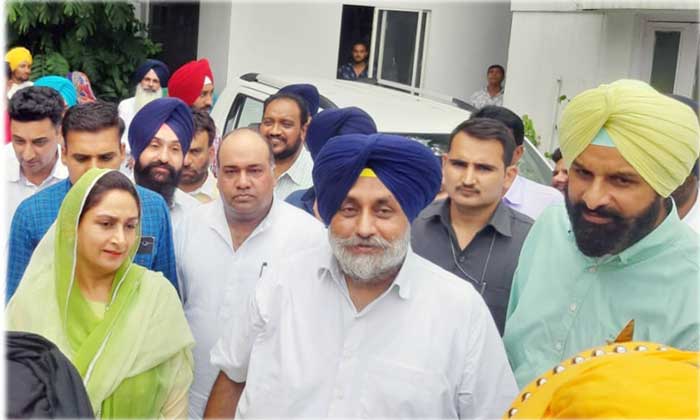 Speaking on the occasion, Mrs Harsimrat Badal said youth were feeling doubly cheated. “They have been cheated by the Congress government which promised ‘ghar ghar naukari’ and failed to deliver and now by fraudulent travel agents.

She said the youth were taken abroad and once there their passports were taken from them, they were not given work permits as promised and in addition were asked to cough up more money.

SAD General Secretary (Youth Affairs) Bikram Majithia while speaking on the occasion disclosed that Congress leaders had sheltered the agent who had sent the Punjabi youth abroad. “This trend needs to stop immediately”, he said while demanding that the Punjab government initiate an online complaint system for NRIs in distress.

He said the SAD had established a Helpline for this purpose. Others present on the occasion included Delhi Sikh Gurdwara Management Committee (DSGMC) president Manjinder Singh Sirsa and Phillaur legislator Baldev Khara.

Meanwhile in another big development, Ram Singh of Sanour village in Patiala returned to India following the intervention of Union minister Harsimrat Badal. Ram Singh had gone to Dubai in 2015 but was left high and dry by his employers who closed shop and fled after being caught cheating on banks.

He had to spend 20 months in a Dubai jail after which he went to Iran. His relatives contacted Sanour MLA Harinderpal Chandumajra following which the process to get him back was initiated. The SAD has also paid for his return fare to India.