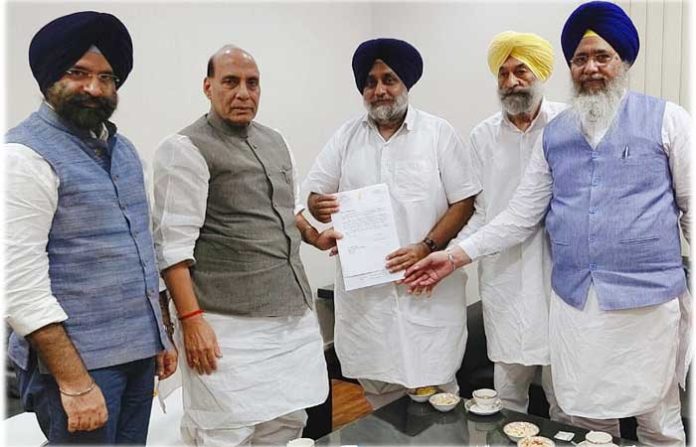 Shiromani Akali Dal (SAD) president Sukhbir Singh Badal today requested union Defence minister Rajnath Singh to examine the case of Sikh soldiers (Dharmi Fauji) who left their barracks in a state of emotional turmoil after the attack on Sri Harmandir Sahib by the Congress government on compassionate grounds and rehabilitate them in society by restoring all army benefits to them.

Mr Badal said in 1984 following the barbaric attack on Sri Harmandar Sahib by the Congress led central government, Sikh soldiers got agitated and left their barracks and place of postings in Ramgarh Cantonment, Pune, Alwar, Bareilly and few other places in a state of emotional turmoil.

He said these soldiers, who did not intend to commit sedition or treachery, were purely expressing their hurt feelings only on the issue of attack on the holiest of Sikh shrines with tanks and mortars.

The SAD president said these soldiers, who were otherwise disciplined and even decorated, were dismissed from service and were denied all pensionary benefits. He said this had caused immense hardship to them and their families.

Giving details from a representation submitted by DSGMC President Manjinder Singh Sirsa, the SAD president said a holistic view should be taken about the entire issue. He said earlier in the wars of 1962, 1965 and 1971 as many as 15,000 army personnel had deserted from the battlefield but were later taken back into service and even received promotions subsequently.

Mr Badal also recounted the stellar role played by Sikh soldiers in all wars and conflicts faced by the country and said they had always contributed to the pride of the nation. “We need to take a compassionate view of the conduct of the Dharmi Faujis”, he added.

The delegation urged the Defence minister to get the entire case examined and said the entire Sikh community would be grateful if the Dharmi Fauji were provided pension and other relief as well as facilities due to them as former servicemen.