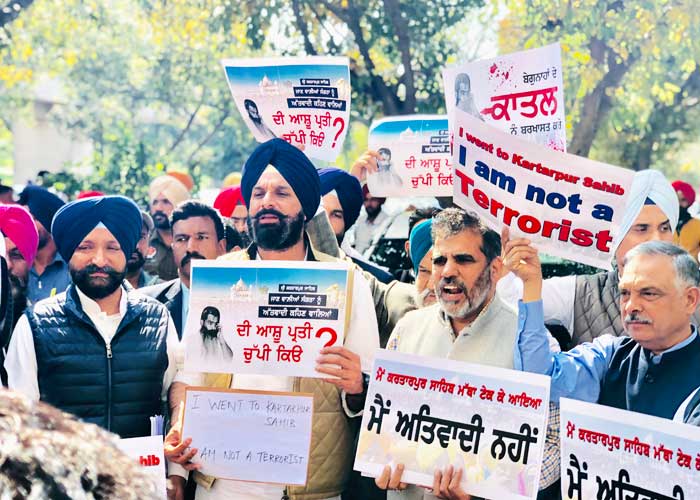 The Shiromani Akali Dal (SAD) legislative party today said the anti-Sikh face of the Congress party as well as the Gandhi family had been exposed with the ruling party refusing to give a statement on hurting of Sikh sentiments by the State DGP in the Vidhan Sabha.

The SAD legislative wing, which even held a protest on this issue both outside and inside the Vidhan Sabha besides demanding the dismissal of cabinet minister Bharat Bhushan Ashu for confessing that he had sheltered terrorists, said now it was clear that the Gandhi family was behind the conspiracy to close down the Kartarpur Corridor.

“The Congress government has proved that it is following the footsteps of Indira Gandhi and that Sonia Gandhi and Rahul Gandhi continue to harbor ill will against the Sikh community.

The leaders said it was a black day in the history of the Vidhan Sabha that the said House which had celebrated the opening of the Kartarpur Corridor was now witness to the Congress party becoming a party to despicable attempts to shut it down by refusing to give a clear cut statement on the burning issue.

Mr Dhillon and Mr Majithia said it was condemnable that chief minister Capt Amarinder Singh did not attend the assembly session today and set the record straight. “We even requested Parliamentary Affairs minister Brahm Mohindra to give a statement on this issue to dispel the agitation amongst the Sikh community but neither he nor any other cabinet minister or any Congress legislator spoke on this issue.

This proves that the Congress government is playing to the tunes of the Gandhi family as part of a pre planned strategy. It has already been proved that the erstwhile UPA government ordered the IB wing to ensure the Kartarpur Corridor was not opened. Now it is working to close it down”.

Stating that the Gandhi family was committing a crime against humanity by linking the opening of the Kartarpur Corridor with terrorist training camps, the SAD legislative wing said “we will not allow the Gandhi family to label Sikhs as terrorists as it has done in the past. We will fight this heinous conspiracy tooth and nail”.

Speaking about the revelations about cabinet minister Bharat Bhushan Ashu which had come out in the open, the legislative wing demanded the immediate dismissal of the minister. They said it was shocking that the minister had given a self confessional statement regarding his involvement in a bomb blast in Ludhaina, murder of a police constable, murder of three women and even admitted to sheltering terrorists.

Mr Dhillon and Mr Majithia said both Congress president Sonia Gandhi and Rahul Gandhi should explain why such a person was being allowed to remain in the State cabinet. They said the SAD would go to the people and force the Congress government to take appropriate action in the case besides sacking Ashu.