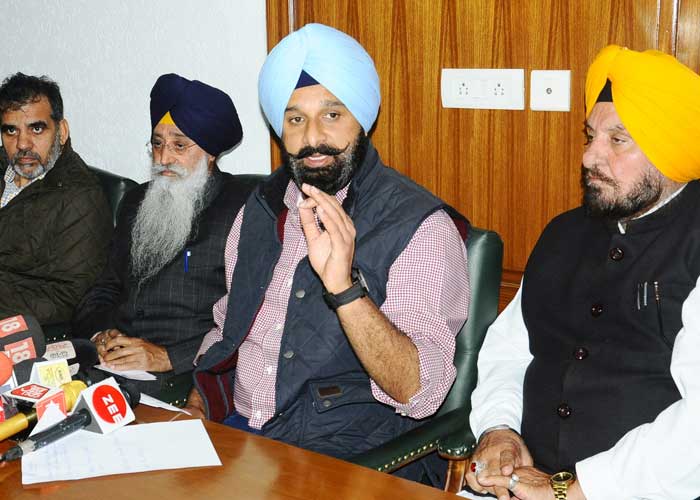 Addressing the media after submitting a memorandum to the Vidhan Sabha Speaker, the legislative wing leader Sharanjit Singh Dhillon and former minister Bikram Singh Majithia said the party had appealed to Speaker Rana K P Singh to extend the forthcoming budget session to fifteen days, saying presently only one day had been kept to discuss the Governor’s Address, what to speak of taking up public issues.

They said the Congress government should not run away from debate and that the opposition should be given appropriate time during the budget session to take up peoples issues.

The SAD leaders said the people of Punjab were reeling under the all time high power hikes which had taken power rates to Rs 9 to Rs 10 per unit from only Rs 5.50 per unit during SAD-BJP tenure. Both Sharanjit Dhillon and Bikram Majithia said the Congress government should fulfill its promise to supply power to the people as well as industry at Rs five per unit.

“It should also hold an independent inquiry into the Rs 4300 crore scam and action against the then Power minister for indulging in corruption besides explaining why the Punjab Pollution Control Board had worked over time to save private thermal plants from action for not installing anti-pollution devices”.

Giving details of the memorandum, the SAD leaders said they had also demanded threadbare discussion into the pressure being put on witnesses of the Behbal Kalan police firing case to rescind from their statements.

They said while the widow of one of the prime witnesses Surjit Singh had already exposed how Congress leaders including minister Gurpreet Kangar and Advisor Kushaldeep Dhillon had pressurized her husband, another case of how names of two officers responsible for the firing incident had been removed from the FIR had also come to light.

The leaders – Dhillon and Majithia said Resham Singh, who was the brother of firing incident victim Krishan Bhagwan Singh, had now represented to the chief justice of the high court stating that the names of DSP Harinder Gill and ADCP Paramjit Singh Pannu had been removed from the FIR at the instance of minister Tript Rajinder Singh Bajwa.

They said Resham had also appealed to the chief justice to get the matter inquired under his supervision. The leaders said the government was morally bound to explain this state of affairs as well as provide security to the witness families.

Mr Dhillon and Mr Majithia said chief minster Capt Amarinder Singh had uttered a white lie by claiming that eleven lakh youth had been given jobs. “Punjabis are asking for the name of these fictitious job receivers. Not only this, they want to know why unemployment allowance of Rs 2,500 per month is still not being given.

They said similarly one lakh students had suffered and not taken admission in colleges after the government failed to provide SC scholarship to them. The Dalit community was also waiting anxiously for the government to announce that it would ensure status quo on job reservation and promotions in government service but is dismayed that the government has kept quiet on this subject”.

The Akali leaders said Punjabis also wanted a discussion on loot of the State exchequer by Congress leaders be it through illegal mining or liquor smuggling as well as police –gangster- minister nexus which had resulted in jails becoming a centre for extortion and contract killings with five NRIs being targeted recently.

They said the law and order situation was such that police were clueless after dacoits decamped with 30 kilogram of gold worth Rs 15 crore from Ludhiana.

Speaking about the fate of farmers, Mr Dhillon and Mr Majithia said the suicide ratio in Punjab was the highest because the Congress government had reneged on its complete loan waiver promise. They said suicide victims were not being given the promised Rs 10 lakh compensation as well as promised jobs.

They also highlighted that sugarcane farmers were suffering because they were not paid Rs 350 crore dues from government mills alone and that this along with low State Assured Price (SAP) for sugarcane had sounded the death knell of diversification in agriculture in the State.

The SAD legislative wing members also said the people wanted to know what concrete steps the government was taking to ensure protection of its river waters besides ensuring justice to government employees who were being denied Dearness Allowance and subjected to Professional Tax even as sixth Pay Commission award was being delayed and contractual employees were not being regularized.