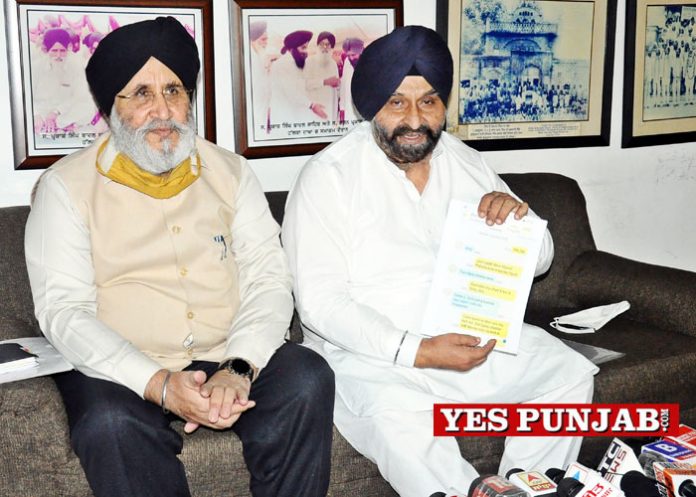 The Shiromani Akali Dal (SAD) today demanded a CBI inquiry into the food grain scam in which a PUNSUP district manager has been caught asking ‘arhatiyas’ to cough up commission for food and civil supplies minister Bharat Bhushan Ashu besides arranging money for “Pappu” Rahul Gandhi’s visit to Punjab. It demanded that Ashu be sacked immediately and a criminal case be registered against all Congress leaders named by the accused.

Addressing a press conference here, former minister Maheshinder Singh Grewal said despite the entire conversation between the PUNSUP DM Praveen Jain and the commission agent going public the government had not ordered an inquiry into the matter and was trying to hush it up by suspending the DM.

“The conversation points to a multi-crore foodgrain scam involving smuggling of low cost paddy from Uttar Pradesh which is purchased by government agencies at msp in Punjab and shifted to shellers of Congress leaders. The union government which has extended a huge cash limit to Punjab for purchase of paddy is also being defrauded besides the farmers of the State”.

Stating that several Congress leaders had been indicted in the case, Mr Maheshinder Grewal said earlier when 25 trucks carrying paddy from Ropar had been seized from the outskirts of Amritsar the accused had claimed that they were carrying the food grain to cabinet minister O P Soni’s sheller.

He said in the recent disclosure involving the PUNSUP DM also the name of several Congress politicians including the main beneficiary Bharat Bhushan Ashu besides Lal Singh and Hardyal Singh Kamboj had also cropped up.

He said with thousands of crores of paddy from outside the State being procured by Punjab procurement agencies in collusion with Congress leaders the ultimate sufferer would be the farmers of the State whose produce would not be procured.

Asking chief minister Capt Amarinder Singh why he was silent on the issue despite shedding crocodile tears at the injustice meted out to the farmers of the State in the recent assembly session, Mr Grewal said “it seems the chief minister has given an open license to Congressmen to loot at will.

This is why he has always supported the loot of the State treasury be it the liquor scam, seed scam or the SC scholarship scam. Even now we do not have any hope of justice from the chief minister as he is known to give clean chits to corrupt ministers and that is why we have demanded a CBI inquiry into the case”.

Mr Grewal said the Congress government should also tell its role in the food grain scam because the PUNSUP officer was recorded making persistent demands for payment of advance to be given to the food and civil supplies minister as well as the PUNSUP DM.