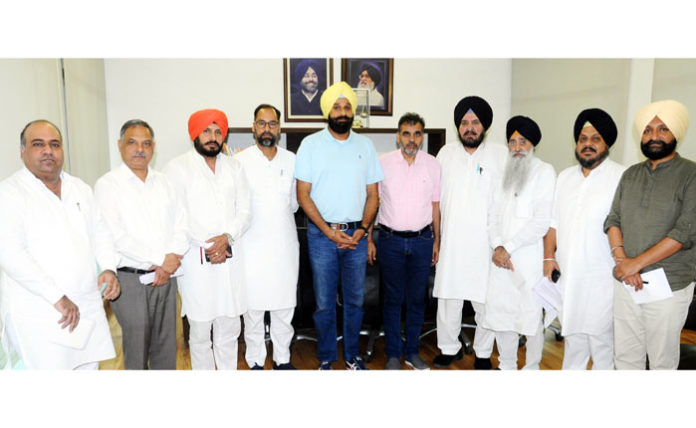 The Shiromani Akali Dal has demanded an immediate extention of the assembly session to readdress pivotal issues pertaining to the welfare of the state. SAD will summit an memorandum to the speaker tomorrow said Senior Akali leader Bikram Singh Majitha here today at the party headquarters.

Lamenting that the state was going through the toughest times with complete collapse of the law and order . “ our jail ‘s have become a mockery with murders and sucide’s becoming a norm of the day.” The children in the state are being abducted and unfortunately he said while referring to the latest episode in Rajpura.

The SAD will also be raising the issue of farm loan waiver which was promised by the congress government but alas the agrarian state was reeling under duress of loans has been first “ duped and then dumped” by the Captain Amarinder Singh government. Hundreds of farmers have taken the extreme step by committing suicides .

The tragedy of the farmer said Majitha does not stop here alone . The banks have started auctioning the farmers land and his meagre existence is at total stake. The bread bowl of the country has no respite in the state congress government . The double whammy to the agriculture community is enhanced by the non payment of crop damages promised by the state government during 2017, 2018 .

The SAD will also demand immediate enhancement on the lines of Haryana government which has increased the 6000 for farmers to 9000 to help the agrarian sector. While under the National health protection schemes and Ayushman Bharat yoyana scheme treatment up to five lakhs has so far not been implemented and lakhs of poor and needy patients are suffering. Majithia rued that a “ state which does not take care of its sick and needy has a failed governance .

The Speaker will also be apprised of the hardship being faced by schedule caste and schedule tribe students who’s scholarships are not being given causing them immense hardship to continue there studies . In the recent past a highly educated boy Jagsir Singh Budlada committed suicide as the so called promised jobs to the educated youth in the state were not made available .

The farce and fraud of Captain Amarinder Singh to exploit the innocent students by making false promises that jobs would be provided to each house. The congress is a party of prevarication and has exploited the voters and has not delivered even one promise. Lamented Majithia.

In two and half years the congress government in the state has not given 2500 promised to the youth till employment was to be provided. The 35000 contract workers in the state are still awaiting for permanent placement rued Majithia

Coming to assured working days under the NEGRA scheme the poor are being conned and every day a new scandal of not providing them the assured days of work are being denied . The economic condition of the state was in dire straits as the government had no intention of giving good governance. The false promises list by the congress government had also included five marla plots for the poor . The people are still

Waiting for the scheme to be implemented.

The Sixth pay commission is another non starter as it has not been implemented and PF is not being reimbursed . The working class is reeling under economic distress curtsy the insensitive practises of the state government.

Lastly the Industry had seen zeo growth and there are no new venues for generating employment in the state. The PSEB has repeatedly hiked the rates of the electricity and the poor, and lower middle classes are suffering due to apathy of the rulers. The ill legal mining is going on rampantly and no checks are being done. The drug issue is looming its large bogey on the state and 24 deaths alone have taken place in the last month.

The SAD in its responsible role as the major political party will strive to extend the assembly session so that major pivotal economic issues affecting the state in form of non implement ion of schemes and reimbursements be addressed immediately to give relief to the people of the state.