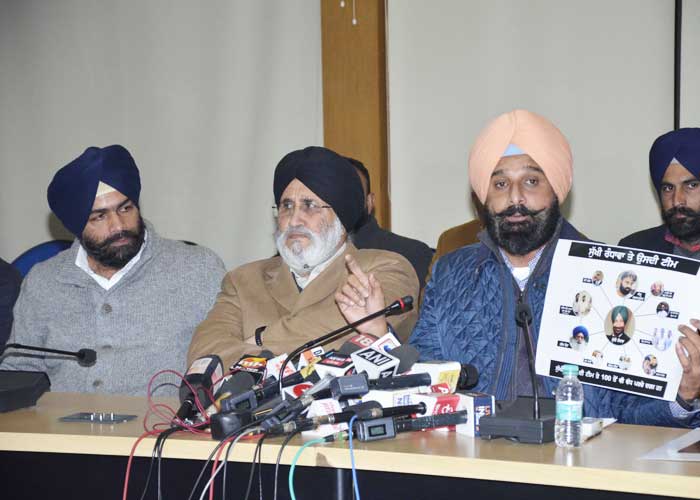 The Shiromani Akali Dal (SAD) today demanded the immediate dismissal of Jails minister Sukhjinder Randhawa for patronizing gangsters even as it demanded a CBI probe or that by a sitting judge of the high court into the entire issue, including latest death threats received by former minister Bikram Singh Majithia from notorious gangster Jaggu Bhagwanpuria.

Addressing a press conference here, former ministers Dr Daljit Singh Cheema and Bikram Singh Majithia said despite the fact the entire SAD legislature party had brought the threats received by the latter to the attention of the DGP, nothing had been done in the case.

The leaders said now Jaggu Bhagwanpuria had issued a direct death threat to Mr Majithia from jail premises on December 10 through his facebook account.

The SAD leaders said though they would bring the latest death threat to the notice of the State DGP again, they felt no headway could be made in the case till the Jails minister continued to patronize Jaggu Bhagwanpuria.

The leaders said chief minister Capt Amarinder Singh should dismiss Randhawa immediately and order a CBI probe or that from a sitting judge of the high court into the Minister-Gangster nexus. “The present inquiry marked by the chief minister is an eye wash as he has marked an inquiry and simultaneously given a clean chit to Randhawa”.

Giving details, Mr Bikram Majithia also showed proof of Jaggu Bhagwanpuria making a video call from jail while issuing a threat to a witness in a crime case registered against one Maninder Singh. He said Maninder was also a close associate of the Jails minister and showed various pictures of Maninder in the company of Randhawa.

A Congress councilor Sonu also disclosed how Jaggu Bhagwanpuria and his associates were getting acquitted in all cases registered against them with either the police not presenting the challan in time or the witnesses backing off from testifying in the case due to death threats.

Mr Majithia while showing Jaggu wearing a heavy gold chain while making the video call from jail, said the gangster was leading a five star life in jail contrary to the claims of IG Kunwar Vijay Pratap Singh who had given him a clean chit within hours of the SAD legislators approaching the DGP with a complaint regarding threats made by the gangster.

He also disclosed that two phones were recovered from Jaggu during a raid in Patiala jail but they were not deposited in the jail department but had instead been handed over to the Jails minister.

Mr Majithia said an effort was being made to shift Bhagwanpuria to Amritsar jail as his main area of operations was in the Majha region. He showed a facebook post by one Guru Fetehgarh churian who had earlier issued threats to him. The latest post, while urging the Congress government to shift Bhagwanpuria to Amritsar jail, also appeals to everyone not to write anything against the government.

Mr Majithia also informed that Sukhjinder Randhawa was wrongly stating that most cases had been registered against Bhagwanpuria in Majithia assembly constituency.

He said this was a lie and gave details showing how only five cases had been registered against Bhagwanpuria in Majithia and not 29 as claimed by Randhawa and that the most cases of Bhagwanpuria where associated with Gurdaspur district.