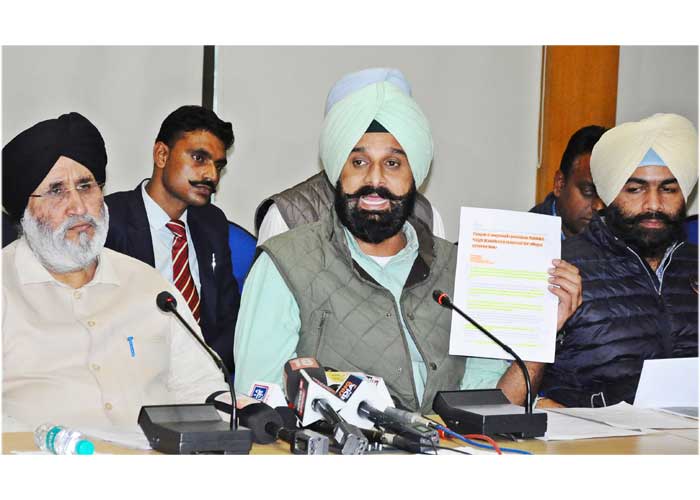 The Shiromani Akali Dal (SAD) today demanded an inquiry by a central agency or a sitting judge of the high court into the Rs 1,000 crore extortion racket being run by gangster Jaggu Bhagwanpur and his associates under the patronage of Jails minister Sukhjinder Singh Randhawa.

SAD leaders Bikram Singh Majithia and Dr Daljit Singh Cheema while addressing a press conference here, also demanded that Jails minister Sukhjinder Singh Randhawa should be booked and arrested for extending patronage to Congressmen who brutally murdered former Akali Sarpanch Dalbir Dhilwan besides investigating the role of Jaggu Bhagwanpur in the murder as well as extortion racket being run by Jaggu from jail.

The SAD leaders said a central inquiry by the CBI or National Investigation Agency (NIA) or even that by a sitting judge of the high court could alone expose the Minister – Gangster – Police role in the gruesome murder of Dalbir as well as the role of Jaggu Bhagwanpur in extortions and contract killings as well as forcible control over Kabbaddi players and tournaments.

Mr Majithia and Dr Cheema said it was seven days since Dalbir Dhilwan was murdered but his killers were still at large. “This is all because of the influence of Sukhjinder Randhawa who is giving shelter to the killers. If the police is serious about arresting the assailants it should search the residence of the minister as well as his close associates”.

Mr Majithia also provided documentary evidence to link Jaggu Bhagwanpur with the Jails minister. He showed how Jaggu and his brother Manu were close associates of Randhawa’s close associate Babbu Sukharaju. He said Sukharaju’s nephews Kawal and Manjot were running a Kabadi Club in Newzealand which controlled Kabaddi players as well as tournaments abroad.

He said Kawal and Manjot even targeted their rivals in India through contract killers as had happened in June this year when they fired shots at the house of a rival Kabaddi organizer Gurvinder Bains when he had come visiting his home in Hoshiarpur from Newzealand.

The SAD leaders said Jaggu and Manu Bhagwanpur regularly proclaimed their closeness with Sukhjinder Randhawa through advertisements in newspapers. He said immediately after the murder of Dalbir Dhilwan, Jaggu’s associates had come up with a facebook post proclaiming Jaggu as a ‘sahn jat’.

The Akali leaders said despite this mountain of evidence linking the gangsters with the Minister and clear statement of Dalbir Dhilwan’s son Sandeep that his father’s death was a political murder; the Batala police was not taking any action in the case.

He said SSP Opinderjit Ghuman had refused to meet Dalbir’s daughter and was not registering the complaint of Dalbir’s son Sandeep that his father’s killers had the direct patronage of Sukhjinder Randhawa.

Mr Majithia said Randhawa’s role was also proved from the fact that he did not commiserate with the family of Dalbir who were his constituents and lived three kilometers from his house. “In fact Randhawa termed the family as a family of terrorists which is shameful and not expected from any elected representative”.

He said instead of levying such allegations on anybody, Randhawa should know that his family had a history of harbouring terrorists. He showed news paper reports which stated that Sukhjinder’s father Santokh Singh Randhawa was removed as Punjab Pradesh Congress President on charges of harbouring dreaded terrorist Gurinder Singh.

He said it was also in everyone’s knowledge that Sukhjinder Randhawa had made gangster Jaggu Bhagwanpur’s mother Harjeet Kaur member, Panchayat of Bhagwanpur village and had also given her the control of the panchayat.