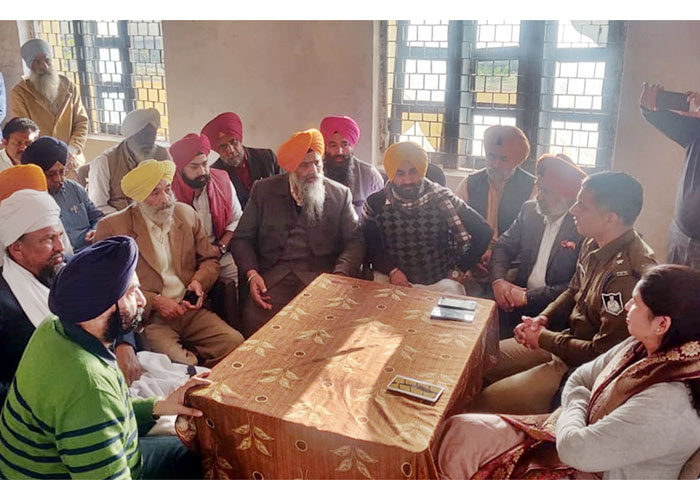 A two member high level team of the Shiromani Akali Dal (SAD) today asked the Madhya Pradesh government to provide a compensation and rehabilitation package to displaced farmers of Karahal in Sheopur district of Madhya Pradesh besides taking strict action against officials who had destroyed their standing crop and houses.

The two member delegation comprising mp Balwinder Singh Bhundur and senior leader Prof Prem Singh Chandumajra visited Karahal and also interacted with the Sikh population of the area besides interacting with residents at the gurdwara there. It also interacted with members of the district administration separately.

Giving details of the visit, Prof Chandumajra said it was shocking to learn that no effort was made to provide alternate land to the Sikh families before their land was taken over by the State government.

“The Sikh families have also not been paid any compensation despite being uprooted from their land and demolition of their houses in a most unlawful manner. Neither has any concrete action been taken against the officials who indulged in this heinous act to displace Sikhs from their home and hearths”.

Both Mr Bhundur and Prof Chandumajra stressed upon the district officials to first see how the farmers could be given the same amount of land which had been taken away from them at an alternative site. They said farmers should also be taken into confidence and they should also be offered a rehabilitation and compensation package to resolve the issue amicably.

Earlier during interaction with affected farmers at the Karahal gurdwara, the SAD team was told that the affected families had suffered losses of crores in the arbitrary drive conducted by the district administration. The affected Sikh families disclosed that their land was taken away from them and their houses were demolished despite the fact that they had legal papers regarding ownership of the land.

Meanwhile both Mr Bhundur and Prof Chandumajra questioned the veracity of the drive ordered by chief minister Kamal Nath against supposed land mafia elements. The leaders said it was strange that the drive was conducted only against members of the Sikh community and no one else had been touched. “This indicates that the Madhya Pradesh government is discriminating against the Sikhs. We urge it to go in for an immediate course correction and not target the Sikh community in any manner whatsoever”.

Other prominent members of the Sikh community who reached Sheopur along with the team included Ravinderpal Singh Teema and Rajinder Singh Kuku of the Gursikh Welfare Association Agra, Ravinder Singh Kanpur and Tejwant Singh Raina from Jhansi.