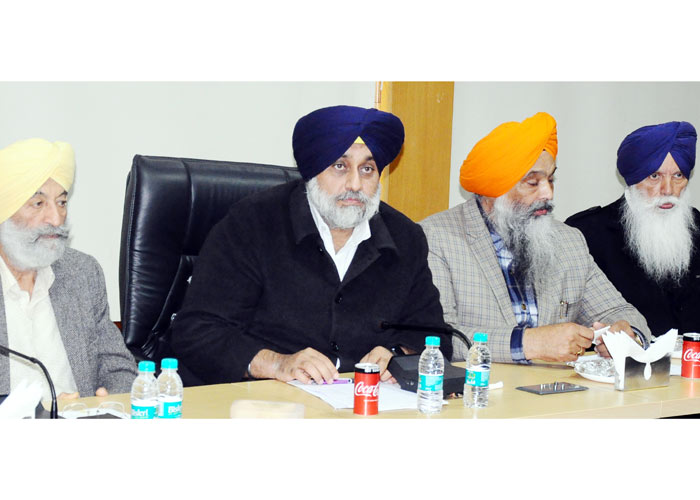 The Shiromani Akali Dal today reiterated that it supports the Citizenship amendment Act (CAA) to the extent that it protects the interests of members of the Sikh community but wants it amended to widen its ambit to include the Muslims also in it. “

A Resolution passed at a special meeting of the Core Committee of the party chaired by the party President S Sukhbir Singh Badal also asked the Punjab Chief Minister Captain Amarinder Singh to “clarify his confused stand on the CAA and to come clean on whether he supports or opposes the protection given the Sikhs under that Act.

“As of now, it is clear that he is allowing himself to be brow-beaten by his party High Command , known for its anti-Sikh psyche, stance and policies, and is opposing the CAA in its entirety including the protection given to the Sikhs, along with Christians, Parsis, Hindus, Buddhists and jains.

Captain Singh needs to tell the Sikhs whether he supports or opposes the clauses in the CAA which pertain specifically to the members of the great Sikh religion,” said the SAD Core Committee Resolution.

The Resolution further said, “We support the Act in as far as it grants protection and safeguards to the Sikhs and several other communities including the Hindus. But In its present form, the Act falls short of being inclusive and secular and to that extent; it goes against the core ideals bequeathed to us by the great Guru Sahiban, saints and seers down the ages as it discriminates against a significant minority in the country, the Muslims. We want the Act to be amended to remove that discrimination.

Discrimination on religious grounds runs against the core beliefs of the great Hindu religion too which regards the whole world as one family ( Vishawa Kutumbakam) says the SAD Resolution.

“The SAD has always been in the forefront as the custodian of the great inclusive vision of Baba Sahib B R Ambedkar as enshrined in the Constitution of India. Secular democratic values are the cornerstone of the Constitution and the SAD has always made supreme sacrifices to protect those values in letter and spirit. That great heritage and tradition will continue to guide the party in future also,” said a resolution.

Giving details of the Core Committee meeting to the media, the party spokesperson, Harcharan Singh Bains said that on the issue of Citizenship Amendment Act , “the SAD supports the CAA in as far as it protects and safeguards the interests of the aggrieved members of the Sikh community along with the Hindus, Buddhists, Jains, Christians’ and Parsis. “While the SAD does not oppose the CAA’s protection to the Sikhs, we want that it should not discriminate against any community and must include the Muslim also in its ambit.”

The Core Committee also demanded that Revenue minister Gurpreet Singh Kangar and Faridkot legislator Kushaldeep Singh Dhillon be booked for murder of the former Sarpanch of Behbal Kalan following disclosures by the victim’s family that the Congress leaders had caused the death of the prime witness in the Behbal Kalan police firing case.

It resolved that since the two Congress leaders had misused the police as well as the Electricity department to force the former Sarpanch Surjit Singh not to give witness against police personnel who fired and killed innocent Sikhs protesters at Behbal Kalan in Faridkot district in 2015 a criminal case should be filed against them and a CBI inquiry should be held into the matter.

The meeting also decided that the party’s strategy in the forthcoming Delhi elections will be decided after consultations with the Sikh masses, leaders and various social and religious organizations of the Sikhs there, said the Resolution.