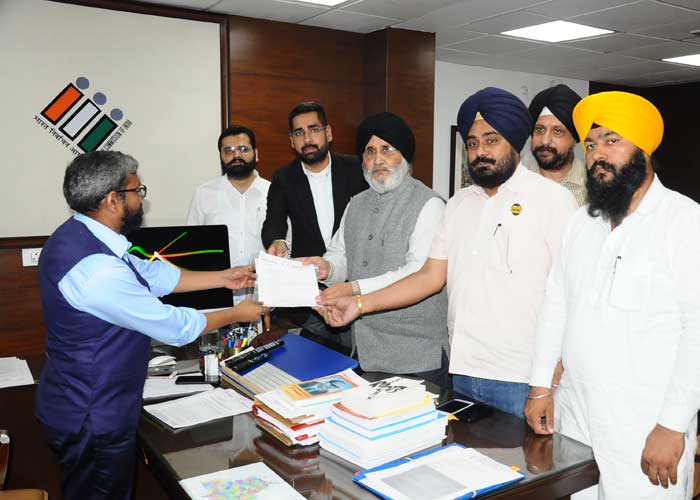 The Shiromani Akali Dal (SAD) today urged the chief election commissioner to deploy paramilitary forces in Punjab to conduct byelections in four assembly constituencies besides conducting videography in all booths to ensure free and fair elections.

Disclosing this after submitting a memorandum in this regard, former minister Dr Daljit Singh Cheema said the SAD briefed Chief Electoral Officer (CEO) Dr Karuna Raju that the Congress party was creating an atmosphere of fear in the four assembly constituencies going to the polls with the aim of influencing the results as they had done in the case of elections to municipal and local bodies.

Dr Cheema said adequate paramilitary forces needed to be deployed to thwart this besides ensuring hundred per cent videography in all booths, both inside and outside the booth. The SAD also demanded an increase in the number of election observers to ensure free and fair elections.

In a separate representation, the SAD also demanded the immediate transfer Dakha SHO Prem Singh from Ludhiana district immediately and a high level inquiry into his acts of misconduct to ensure free and fair polls in Dakha Vidhan Sabha constituency.

It said the SHO was closely associated with the Congress party but had been posted to Dakha prior to the announcement of the by-election to threaten political rivals as he had done in the past also when posted as SHO Dehlon during the local bodies’ elections.

Dr Cheema also submitted an audio recording to detail the past misconduct of the SHO. In the audio recording the SHO is heard threatening Aman Arora whose wife was contesting the election from Shaheed Bhagat Singh Nagar in Ludhiana district with dire consequences if she did not withdraw her candidature in favour of the Congress candidate.

The representation also detailed how the SHO’s son Jasparamveer Singh (Goldy Bhangu) was an active leader of the Congress party and had even contested the Panchayat Samiti election from Salempur Sekhan zone in the home district of chief minister Capt Amarinder Singh.

It said a probe should be ordered into the past misdeeds of the SHO and it should also be ascertained as to why the SHO did not inform the Election Commission that is son was an active leader of the Congress party.

The SAD said it was shocking that instead of punishing the SHO for his past misdeeds, the Congress government had rewarded him and posted him as SHO in Dakha, a constituency which was going to the polls and where the chief minister’s OSD Sandeep Sandhu was contesting the polls as a Congress candidate.