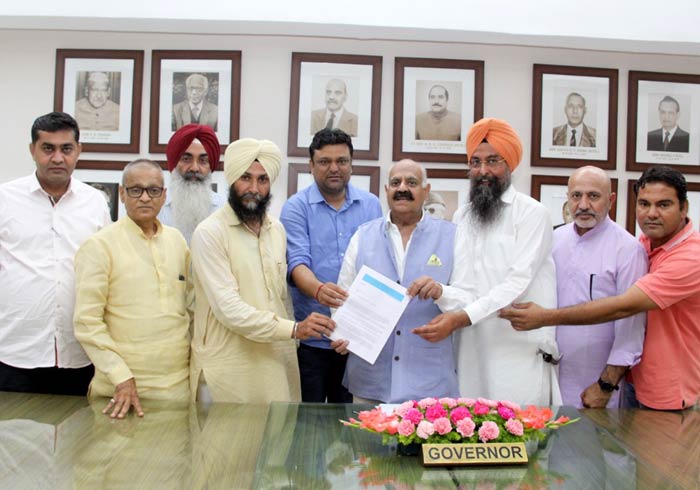 The Aam Aadmi Party (AAP) has expressed its serious concern over the rising pollution level in the river waters posing a potential danger to the lives of people who were subjected to consume polluted drinking water , besides jeopardizing aquatic life in the region.

A delegation of the AAP, led by Kisan Wing chief and Kotkapura MLA, Kultar Singh Sandhwan, under the aegis of Naroa Punjab Manch, a joint front comprising more than 50 NGOs working on the quality of river waters, met the governor of Punjab, VP Singh Badnore, here on Wednesday and submitted a memorandum.

Others who were a part of the delegation included Gurpreet Singh Chandbaja, convener, Naroa Punjab Manch, Baltej Singh Pannu, secretary of the Manch,Mahesh Peddiwal, Ramzan Ali, Parikh, a joint delegation representing Punjab and Rajasthan on improving the quality of river waters.

In the memorandum, the delegation apprized the governor about the waters of Satluj and Beas rivers being directly supplied to hundreds of cities, towns and villages of Punjab and Rajasthan via canal system from Harike Pattan in Amritsar (Punjab), saying that more than one crore people depended on these rivers to fulfill their drinking water needs.

The memorandum further said that the quality of water being supplied through these canals was highly polluted and not fit for human consumption, adding that the untreated effluents from industries and sewage from urban local pockets at various points in Punjab, Rajasthan and Himachal Pradesh was wreaking havoc.

The delegation further said that National Green Tribunal (NGT) had directed the state governments to prepare an action plan to improve the quality of river waters and implement them within a time frame. The states were not doing their bit in this regard. It further added that the state of Punjab was slapped a fine of Rs 50 crore for its lackadaisical attitude in running STP plants properly.

The delegation said that the Common Effluent Treatment Plants of dyeing industries in Ludhiana were under construction since 2014 but had missed deadlines many times due the lack of coordination between the state and central governments and industrial bodies which were jointly running the projects and hence the escalation in the pollution levels.

Further, the delegation said, dairies in under the Municipal Corporation, Ludhiana had more than one lakh heads of cattle, which were adding to the problem of plenty. The delegation demanded immediate relocation of the dairies out of the city to save the river waters.

He informed that the delegation had already met union Jal Shakti minister Gajendra Singh Shekhawat, the Punjab Pollution Board authorities and Himachal Pradesh chief minister, Jai Ram Thakur, adding that the state governments were not doing anything in this regard and hence the pollution was adding up to the peoples woes. But nothing had come out of the assurances given to the delegation, they said. The delegation informed that the submission of memorandum to governor was a part of the ongoing against pollution river waters.