Home Punjab Rise above politics to send strong message to Centre against bid to... 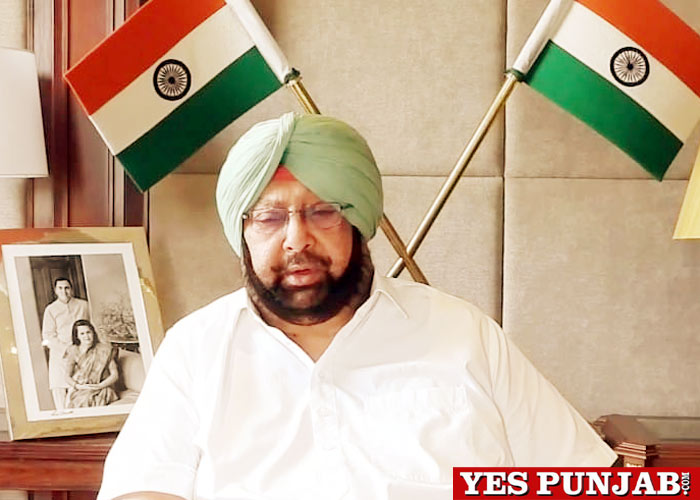 Amid a clarion call by Chief Minister Captain Amarinder Singh to send out a strong message of protest to the Centre on the anti-farmer and anti-federal Ordinances and its proposed amendments to the Electricity Amendment Act, leaders of major Kisan Unions of Punjab on Wednesday unanimously passed a resolution urging the Government of India to reconsider and withdraw the same.

Participating in a Video Conference meeting convened by the Chief Minister, the Unions said the recently promulgated Ordinances and the proposed Amendments to the Electricity Act, 2003, are perceived as being strongly anti-farmer. “These Ordinances and the proposed Amendment are also a direct attack on the federal fabric of the country and, therefore, must be withdrawn,” they said, in a unanimous resolution passed at the end of the meeting.

Underlining the need to protect Punjab and its farming needs, Captain Amarinder earlier asserted that “we all must unitedly stand together notwithstanding our political affiliations.” He said he was fully prepared to take any steps necessary to protect the interests of the state and its farmers, as he had done over the SYL water sharing issue.

The Chief Minister lashed out at the Centre for undermining the contribution of the farmers and the soldiers, pointing out that they had clearly forgotten the Kisan in the ‘Jai Jawan Jai Kisan’ slogans that had reverberated through the country when Punjab’s farmers made India self-sufficient. With other states also now producing food grains, the central government seemed to have decided not just to ignore but actually destroy the interests of Punjab’s farmers, majority of whom were small, he added.

Charging the Union Government with trying to take away all powers from the states, the Chief Minister earlier said “we should raise a united voice to send a strong message to Delhi that we will not allow this to happen.

Everyone, even children, could see through the designs of the central government, which clearly wanted to ruin Punjab, and even withdraw free power to the farmers. Citing the escalating fuel price hike, the Chief Minister said the Congress Working Committee (CWC) had already passed a resolution demanding withdrawal of the hike, which was also designed to cause problems for people, including farmers.

The Chief Minister assured the Union representatives that he was ready to make any sacrifices needed to protect the farmers from these anti-farmer and anti-state ordinances, which were a blatant attack on the federal structure of the Indian Constitution and a clear precursor to withdrawal of MSP, in the light of the Shanta Kumar Committee’s recommendation to disband the FCI.

Apart from causing Punjab’s Mandi Board and Rural Development Board losses to the tune of Rs 3900 crore per annum, the Ordinances were designed to destroy India’s self-sufficiency in food grains, which the state’s farmers had given to the country at great cost to its only natural resource – the water, he said.

Charging the Akalis with double standards, Captain Amarinder said even without their support, the state, along with the Kisan Unions, would unitedly fight the Centre’s move to ruin the agriculture sector while destroying the federal character as enshrined in the Constitution. He said he would try to get chief ministers of other states on board to put up a united fight against the Union Government on this issue.

On a suggestion from PPCC president Sunil Jakhar, the Chief Minister said he would get the proposal of challenging the Ordinances in court legally examined. The Chief Minister warned against trusting the Union Government on the issue of continuation of MSP, saying that notwithstanding the Agriculture Minister’s claim that it would not end, one could not believe them. “It is our responsibility to save Punjab’s future,” he said, questioning the need for the Centre to tinker with the tried and tested marketing system in Punjab.

The Chief Minister assured the farmers’ representatives that he was ready to make any sacrifices needed to protect the farmers from these anti-farmer and anti-state ordinances, which were a blatant attack on the federal structure of the Indian Constitution and a clear precursor to withdrawal of MSP, in the light of the Shanta Kumar Committee’s recommendation to disband the FCI.

Apart from causing Punjab’s Mandir Board and Rural Development Board losses to the tune of Rs 3900 crore, the Ordinances were designed to destroy India’s self-sufficiency in food grains, which the state’s farmers had given to the country at great cost to its only natural resource – the water, he said.

In response to suggestions from various Kisan Union leaders, Captain Amarinder said he would certainly get the issue discussed in the Vidhan Sabha.

Earlier, Jakhar quipped that the Ordinances amounted to punishment for Punjab for making the country ‘atmanirbhar’ in food grains. Recalling Captain Amarinder’s role in leading from the front on the issue of SYL canal construction, he said the farmers were once again looking up to him to fight for their cause.

The meeting saw the Kisan Unions demanding the resignation of SAD’s Harsimrat Kaur Badal from the Union Cabinet, citing the Akalis’ failure to protect the state’s interests to further their own political ambitions. The SAD had completely sacrificed the interests of the farmers to their political masters – the BJP, with whom they were hand in glove on the issue, they felt.

All political parties should rise above the petty politics and fight together if any results are to be achieved and the state is to be protected from annihilation of its interests, they added.

All the Unions were of the unanimous view that the Ordinances, which would lead to severe exploitation of the beleaguered farmers at the hands of the corporates, had to be stopped as the state could ill-afford to leave its farmers at the mercy of traders. Several of the representatives were in favour of convening a special session of the Vidhan Sabha to pass a resolution against the Ordinances. They also lambasted the Union Government for infringing on the state’s rights.

Bhupinder Singh Mann, national president of Bharti Kissan Union (Mann Group) said his organisation was fully with the state government in the fight against these Ordinances, and said Captain Amarinder might need to join the farmers again in their protest dharnas, as he had done in his last tenure as Chief Minister.

The latter responded by saying “I am willing to go any time” but reminded them that their fight was against the Centre and not the state, and hence they should not resort to any drastic measures like blocking roads or stopping trains as that would create problems for Punjab.

Kisan Mazdoor Sangharsh Committee (Piddi Group) president Satnam Singh Pannu termed the Ordinances as pro traders and corporates, and pointed to the recent statement of Union Minister Nitkin Gadkari that produce was available at cheaper prices internationally, clearly indicating that the Government of India was in the mood to withdraw from the procurement process.

Bharti Kissan Union (Rajewal) president Balbir Singh Rajewal said the Ordinances had not come in a day and the recommendations of the Shanta Kumar committee suggested that the Centre’s intentions were not good from the outset. The Electricity Amendment Bill was also aimed at taking away the state’s rights, he added.

Accusing the BJP of backtracking from its promise to implement the Swaminathan Committee report, General Secretary Bharti Kissan Union (Lakhowal) Harinder Singh Lakhowal said the Centre could not be trusted on their promise to continue MSP and procurement. The Union Government was out to ruin Punjab, he said, pointing out that the Mandi system had worked flawlessly for the welfare of farmers.

State General Secretary, Bharti Kissan Union (Dakaunda), Jagmohan Singh said the Ordinances amounted to a triple murder by the central government and said even SAD had sacrificed its agenda of federalism to promote its political interests.

Lashing out at the Akalis, Bharti Kissan Union (Ekta-Ugrahan) president Joginder Singh Ugrahan said that they had joined hands with the BJP in selling everything to the corporates.

Vice President, Bharti Kissan Union (Sidhupur), Mehar Singh urged the Chief Minister to continue leading from the front and promised full support of his organisation. He suggested constitution of a joint committee to fight the Ordinances.

Bharti Kissan Union (Krantikari) president Surjit Singh Phul said there was no doubt that the Ordinances were aimed at destroying Punjab and its farmers. He also lashed out at the central government for trying to usurp the state’s powers and benefit private power producers through the Electricity Amendment Bill.

General Secretary, Jamhoori Kissan Sabha Comrade Kulwant Singh Sandhu, and National President, All India Kissan Sabha (CPI) Bhupinder Singh Sambar, were also vocal in their criticism of the Ordinances, and extended their full support to the Captain Amarinder government on the issue.

Earlier, Chief Secretary Vini Mahajan initiated the proceedings of the video conference meeting with the representatives of various Kisan Unions. Additional Chief Secretary (Development) Anirudh Tiwari gave a detailed presentation on the adverse implications of the Ordinances on Punjab and its farmers.