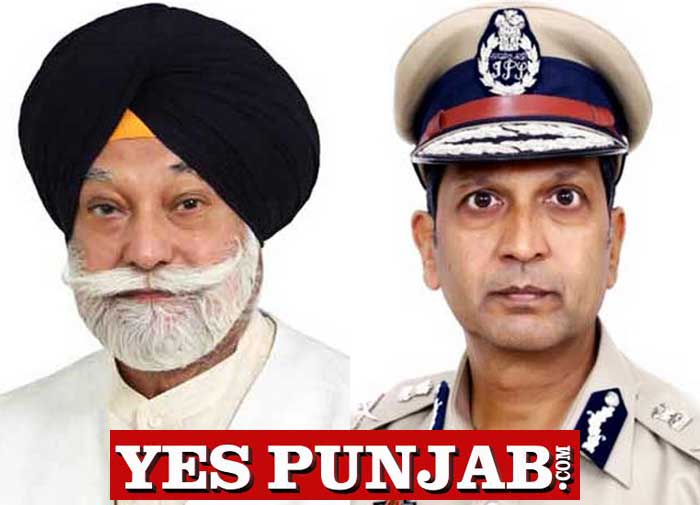 Terming the hypothesis set forth by Mr. Dinkar Gupta DGP, Punjab through assumed arguments while speaking at The Indian Express Idea Exchange in Panchkula yesterday, as an atrocious assault on the dignity of the Sikh community as a whole, former Punjab Deputy Speaker and SAD Taksali leader, Bir Devinder Singh has demanded the removal and arrest of the IPS officer.

In a hard hitting statement issued here today, Bir Devinder Singh said, it was thoroughly outrageous that the fake and imaginary antecedents of uncertain propositions were used by the DGP with a definite design to construct a narrative to vilify the minority Sikh Community.

“In a way he tried to build strong arguments as a ‘pilot design’ to eventually shut the Kartarpur Sahib corridor, as being enunciated by ‘Doval’s Secret Doctrine’ who rabidly opposes the very idea of Kartarpur Corridor,” he said.

“Now it’s the turn of his DGP Mr. Dinkar Gupta, who made a maleficent attempt to brand the entire minority Sikh community as potential terrorists, all through his assumptive hate speech to buttress anti-Sikh premise. The narrative fits in the pattern of anti-minority sentiments being fueled by a specified group of phenomena, which is ruling the country,” he said.

The former Deputy Speaker said that the anti Sikh mindset of the internal security apparatus and personally of the DGP can clearly be measured from his categorical statement in Idea exchange pondering, at Panchkula. It’s rather condescending when he inexcusably discloses himself that he was part of the recent hyperbola creepy deliberations against the very idea of Kartarpur Sahib Corridor in Delhi, Bir Devinder Singh observed.

The SAD Taksali leader recalled how the Punjab Chief Minister Capt. Amarinder Singh has earlier sent a copy of Adolf Hitler’s ‘Mein Kampf’ to Sukhbir Singh Badal, but now his own DGP was following the footsteps of Hitler by fuelling hatred against the Sikh minority.

I am afraid that the CM may have borrowed the Hitler’s Mein Kampf from Mr. Dinkar Gupta’s often consulted personal chronicles. Unfortunately the hate speech has come from a DGP who has been appointed in contravention of the set procedures of the law and also in brazen violation of the rule book.

Bir Devinder Singh said the ‘Hate Speech’ delivered by Mr. Dinkar Gupta DGP, Punjab from the public platform amounts to spread hatred and disaffection against the Sikh community and also against the Religious Sikh Shrine Sri Kartarpur Sahib, which happens to be, one of the most worshiped sacred shrine of the Sikh faith.

Therefore Mr Dinkar Gupta’s invective ridden hate speech must be immediately treated in accordance with law and he must be removed as DGP, followed by suspension forthwith and a criminal case be registered against him under Section 153(A) of the Indian Penal Code for delivering the hate speech against the Sikh community by painting and suspecting the dignity of each and every Sikh pilgrims who visits Kartarpur Sahib Shrine, as potential terrorist.

Bir Devinder Singh said, “As this conspiracy to shut Kartarpur Sahib Corridor is now out, with the hate filled utterances by Punjab DGP, The Congress Party should also explain to the people of Punjab in general and the Sikh Community in particular, that how do they justify the ‘Hate Statement’ targeting a minority Sikh community by the DGP of a Congress ruled sensitive Border State?”