Home Punjab Ready to quit or be dismissed rather than bow to injustice to... 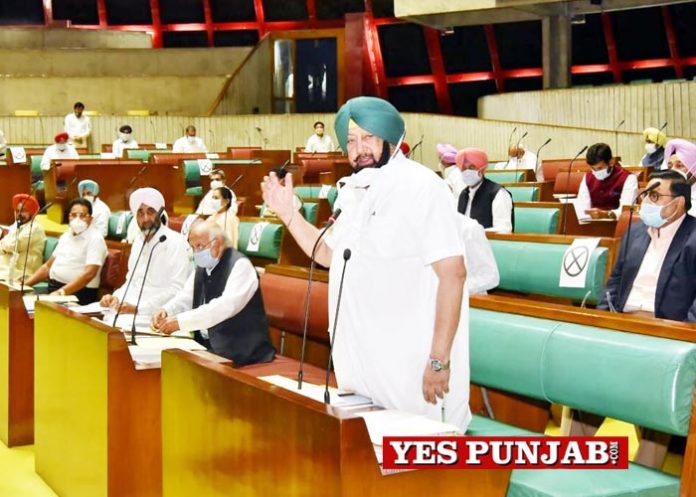 Chandigarh, October 20, 2020 (Yes Punjab News)
Asserting that he was prepared to resign or be dismissed rather than bow to injustice towards Punjab’s farmers, Chief Minister Captain Amarinder Singh on Tuesday warned of possible disruption of the state’s peace and threat to national security as a result of the Farm Laws, pointing out that nobody can tolerate religious hurt and attack on livelihood.

“I am not afraid of resigning. I am not afraid of my government being dismissed. But I will not let the farmers suffer or be ruined,” said the Chief Minister, pointing out that he had chosen to quit at the time of Operation Blue Star instead of accepting or endorsing the assault on Sikh ethos.

Cautioning the Centre against allowing the situation to get out of hand, Captain Amarinder said if the Farm Laws are not revoked, angry youth can come out on the streets to join the farmers, leading to chaos.

The way things are going on at present, the situation has the potential to disturb the peaceful atmosphere, he warned, oberving out that this is what had happened in the 80s and 90s. Both China and Pakistan will collude and try to take advantage of any disruption of the state’s peace, which would pose a serious threat to national security, he added.

The Chief Minister said he was uneasy and upset over the situation and wanted to understand the Centre’s decision to cause such suffering to the farmers amid the Covid crisis.

Even as he reiterated his full support to the agitating farmers, who he said were left with no option but to fight to save themselves and their families, Captain Amarinder appealed to them to help out the state government by ending the Rail Roko and blockades and allow movement of essential commodities.

“We have stood with you, now it is your turn to stand with us,” he appealed to the farmers, adding that the entire House was with them but the state was going through tough times, with power generation at a precarious low, no urea for fertilisers and no space in godown for fresh paddy arrivals.

The Chief Minister was speaking in the Vidhan Sabha while presenting his government’s four Bills to negate the Union Government’s Farm Laws, on the second day of the special session of the House.

The Bills, which are part of the state government’s multi-pronged approach to safeguard the interest of the farmers and the identity of Punjab, seek to amend the Farmers Produce Facilitation Act, the Farmers Agreement and Farm Services Act, the Essential Commodities Act, and the Civil Procedure Code, with the overarching aim of countering the disastrous effects of what the Chief Minister termed as “legislation by subterfuge.”

“In the name of Farming Laws, we have actually enacted Trade Laws. It is not farmers who will have access to a national market, but traders. Hence, the use of term “trade area” in the so-called Farmers legislations is also very telling,” said Captain Amarinder presenting his government’s four Bills for consideration of the House.

The Chief Minister slammed the Centre for trying to finish Punjab with the Farm Laws, and questioned the Prime Minister if this action was justified. The Centre has ignored the farmers of Punjab since other states have now also started providing food frains to the country, he said, blaming the Bharatiya Janata Party (BJP) squarely for sidelining the state’s agriculture.

They forgot how Punjab saved the country and came to its rescue to feed the nation for 70 years, he added. Pointing out that the state government had not been paid its promised GST, Captain Amarinder questioned the Centre over failure to adhere to the constitutional guarantees.

Referring to the backdrop of these legislations, the Chief Minister said the seeds of the crop the state was harvesting today were actually sown back in 2015 by the Shanta Kumar Committee, which recommended “to explore the possibility of compensating the farmers when prices fall below MSP instead of physically handling the large quantities of grains…… This will help in bringing rationality in procurement operations and bringing back private sector in competition with State agencies in grain procurement”.

Captain Amarinder made it clear that his government would not allow the state’s farming community and agriculture, which were the back of its growth and development, to be ruined by the BJP through such devious methods. His government’s four Bills, said the Chief Minister, were aimed at preventing the damage that the central laws would cause to the state and its agriculture, while allying the fears of farmers and consumers.