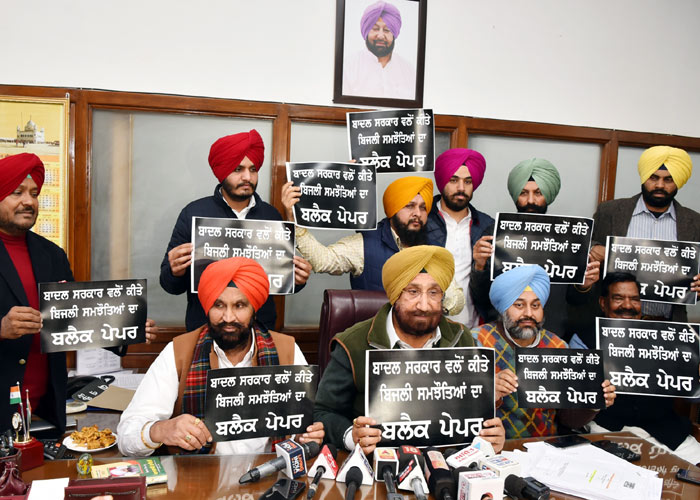 Describing the memorandum submitted by the SAD to the Governor, a bundle of lies, he said that the previous government, for its vested interest, has altered the power policy framed by Captain Amarinder Singh led government in 2006.

Cooperation Minister said that by altering the pro-state power policy, the SAD-BJP government framed a newer power policy for the period of next 25 years to hammer down the citizen of the state with costly power. He dared the previous Chief Minister Mr. Parkash Singh Badal and his deputy Mr. Sukhbir Singh Badal for an open debate on this issue at any platform.

Lashing out at the previous Akali government for its criminal misconduct in running the affairs of the state, Mr. Randhawa said that now the Akalis are shedding the crocodile tears just to cover up their sins. “The process of the signing of MoUs and other term and conditions were laid down at a later stage, after the process of setting up of thermal plants was initiated during their regime”, said Mr. Randhawa.

The Minister made startling revelations supplemented with the evidences on how previous government committed serious breach of trust with the citizen of the state by inking fraudulent power pacts by skewing the power policy framed by the Congress government in 2006.

He clarified that by implementing the Captain Amarinder Singh government’s power policy, power projects of total 2000 MW capacity could have been set up in Punjab, but a single power project more than the capacity of 1000 MW could have not been set up. He said that during congress 2002-07 regime, MoU for setting up 540 MW capacity Goindwal power plant was signed and coal for the plants of the state would also have to be purchased from state owned coal mine at Pachhwara, Jharkhand.

He said that after coming to power, the SAD-BJP altered the policy by signing power pacts of 4000 MW capacity, Secondly, they decided to purchase coal from ‘Coal India’ at exorbitant prices instead of Pachhwara coal mine.

Mr. Randhawa said that Akalis are now blaming the UPA government’s instructions for the signing of these power pacts, which turned out be disastrous for the economic health of the state. He said that instead, the reality is that Gujarat power policy was framed on the directions of the UPA government and the Akalis adopted the Gujarat policy by shunting-out the pro-state sections 9 and 11 of the policy due to their vested interests.

“The Akali Government up till 2017, had paid whooping amount of Rs.6553 crore to the power plants as fixed charges, for which the people of the state are now seeking clarification from the Akalis”, he added.

He said that the state has to paid around Rs.65,000 crore as fixed charges to the power plants for the power pacts of 25 years, whereas total investment on these plants, is mere Rs.25,000 crore.

Cabinet Minister Randhawa said that the former Deputy Chief Minister are now boasting of purchasing power from private power plant @ Rs.2.80 per unit, on the contrary, in their booklet published by them to highlight achievement of their 9.5 years rule, they had mentioned the power purchase @ Rs.6.39 per unit for the people of Punjab. Now, the difference of Rs.3.60 per unit in power purchase is expecting a reply from the Akalis.

He said that during September 2014 to September 2016, the SAD-BJP government purchased power of Rs.13,822 crore from the power companies of other states at the rate between Rs.3.34 to 3.41 per unit, whereas they purchased power from the private power plants of Punjab at exorbitant prices ranging between Rs.5.18 to Rs.6 per unit. He also sought the clarification from Sukhbir Singh Badal on this account.