Home National Ramlila Maidan: A witness to many battles 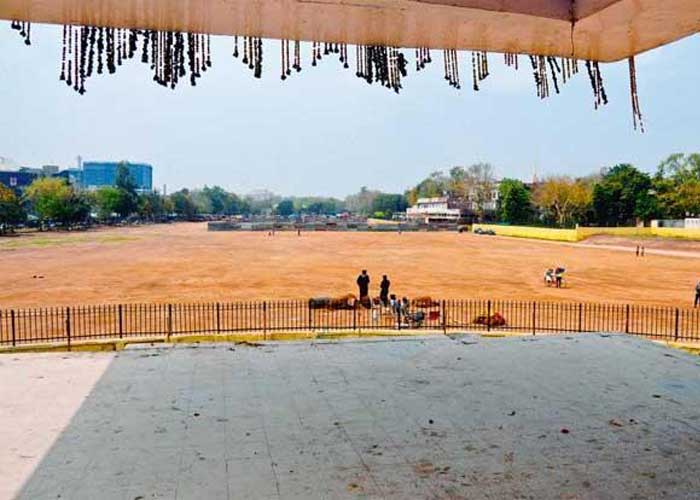 All eyes are on Prime Minister Narendra Modi who is scheduled to address a rally on Sunday at Delhi’s historic Ramlila Maidan, which has a history of more than 125 years and has seen it all during different times.

As history tells us, in 1883 the British started using this deserted place as a shelter for their troops for a long time. The troops set up tents where they could rest after long duty hours.

Later after the British grip on power loosened, children used this place (the area between Turkman and Ajmeri gates) for their recreational activities. However, the troops shelter remained side by side.

After the British left, the locals started using this place to enact Ramlila, that too during the daytime as there was no facility for electricity then.

Recalling an anecdote, 95-year-old Bashir Ahmed told: “I remember one event in 1945 when Mohammad Ali Jinnah came here to address a gathering. When he was addressing the people, some people close to the stage sarted shouting ‘Maulana Jinnah Zindabad’. Jinnah reacted sharply to this and lost his cool and asked the crowd to stop giving him such epithet. Jinnah said he is only a politician and not a ‘maulavi’.

After this, Ramlila ground frequently began to be used as a venue for mass protest rallies.

According to Wajid Ali, a 90-year-old local resident, “Syama Prasad Mookherjee also held a massive rally in the winter of 1952 on the issue of Jammu & Kashmir. It was from here Mookherjee launched ‘satyagraha’ for a longer fight against the government.”

Elders residing in the area shared more such anecdotes associated with the historic protest venue.

“Prime Minister Jawaharlal Nehru used this venue to address huge rallies in 1950s (1956, 57). The venue was also used by Loknayak Jayaprakash Narayan for the massive rally, mother of all rallies as it is called, in 1975 against the alleged autocratic rule of Indira Gandhi,” said another local resident.

Rukhsana and her 85-year-old brother Anwar, who have seen through the ages, said: “On 26 January, 1963, Lata Mangeshkar sang the soul-stirring ‘Aye mere watan ke logon’ at this historic grounnd in presence of Nehru, which made people cry.”

In 1965, after the war victory over Pakistan, Prime Minister Lal Bahadur Shastri addressed a rally and gave the slogan ‘Jai Jawan, Jai Kisan’.

Indira Gandhi, in 1972, celebrated the war victory over Pakistan and creation of a separate nation of Bangladesh at this very ground. The crowd was so massive that it was difficult for the security forces to manage. Even the roofs of the nearby houses were filled with people to hear Indira Gandhi.

Not only this, Britain’s Queen Elizebeth, in 1961, had also addressed people here.

Anna Hazare and Ramdev also used this very ground for their protests against the government on the issue of corruption in recent times.

However, it was Atal Bihari Vajpayee who used this venue more than any other leader.

As Prime Minister Modi on Sunday addresses his rally here, the place is again to be used a venue to sound the bugle for Delhi Assembly elections slated for early next year.  (Agency)