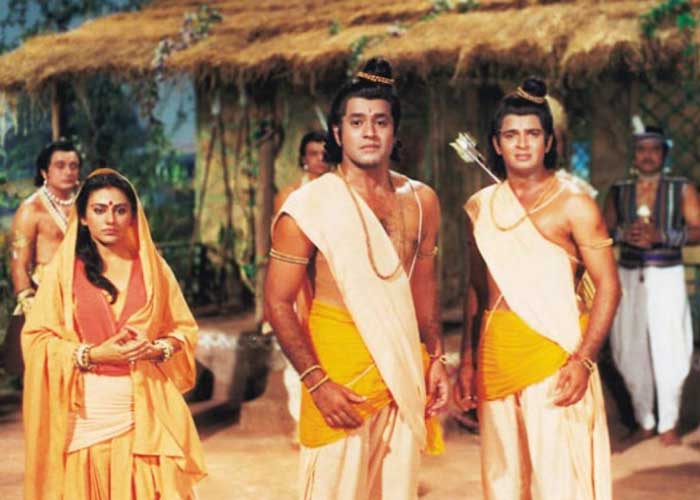 The mythological iconic series “Ramayan” will be back on the small screen to keep the entertainment quotient high during the ongoing 21-day nationwide lockdown. The shows lead actors Arun Govil and Deepika Chikhalia — who played Ram and Sita — feel the revisit will help people spend time amid positivity and also understand Indian culture, instead of fretting with negative thoughts.

On Friday, Information and Broadcasting Minister Prakash Javadekar shared that Doordarshan will re-telecast the iconic show from Saturday on public demand.

Arun Govil, who continues to be synonymous with the character of Ram, feels the re-telecast is a great way to teach the young generation about the “morals, teachings and values of Ramayan”.

“The new generation will get a chance to watch it. They will get to understand the morals, teachings and values of Ramayan. If they will watch it with the family, they can interact also. If they have queries then their family members of the older generation can explain things. It is a family show. How relationships should be…has been shown in the show. Positivity is there. Right now there is a lockdown, you can’t go anywhere. So watching it will be a good way to use the time,” Govil told.

Deepika Chikalia, who became immensely popular playing SIta, told: “It is a very good feeling to know that the show is coming back. And also this is the right time when Prakashji decided to re-telecast it. People will get benefited. It is very important that people make use of the re-run and watch it, despite the presence of many channels. They should also utilise the lessons that they get from the show. Every one should value our culture,”

Deepika also feels it will give another reason for people to stay indoors.

“There must be something about the show that it is back on public demand. It is very important for people to watch it and use it as a medium to learn something. It is another reason to stay indoors and stay safe,” said Deepika, who is overwhelmed with phone calls since the news has been announced.

“Ramayan” is an Indian historical-drama epic television series, which aired during 1987-1988, created, written, and directed by Ramanand Sagar. The show was a television adaptation of the ancient Indian Hindu epic of the same name.

The show was a game-changer for Indian television, hooking the nation to the show. Sunday mornings were never the same for families in India after the first episode of “Ramayan” aired on television. The impact was such that the actors associated with the show, continue to live under the shadow of their characters, with people remembering them for the roles they played in the show, which narrated the life story of Lord Rama and Sita.

“It’s been 33 years since the show went live on the TV. Whole India used to standstill to watch the showï¿½ Today, it is coming back after 33 years. It is wonderful. Well done, what a lovely time to get it back on the small screen amid the lockdown. It’s a great idea. Hats off to you. It will be an enjoyable experience when India will get together to watch the iconic show again,” Vindu told.

DD National also said that on public demand, amid the 21-day lockdown, it will broadcast Ramanand Sagar’s “Ramayan” from Saturday.  (Agency)