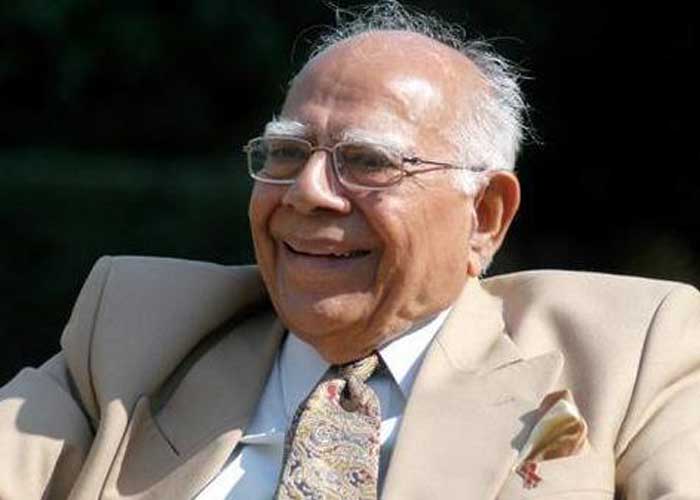 As Ram Jethmalani breathed his last on Sunday morning the veteran barrister, according to those present, left this world wishing the best for his country.

“I wish good for the country”, were the last words of the former Union Law Minister, whose health had deteriorated in the last three weeks mainly on account of old age, and had confined him to bed.

Jethmalani was the father of two sons and two daughters. His son Mahesh Jethmalani is a well-known lawyer. His daughter Rani Jethmalani, also a lawyer, passed away in 2011.

His staff of lawyers said that Jethmalani’s family was present when he breathed his last and that he was not suffering from any major illness.

“Three weeks ago, he was moving around and following his daily routine. He used to talk a lot about the state of affairs in the country, and always wanted good for the country,” said a junior advocate.

Jethmalani had also announced his candidature for the President of India by launching a political front, the Bharat Mukti Morcha. He had famously claimed, “I owe it to the nation. I want to offer my services for the good of the country.”

In 1995, he launched a political party Pavitra Hindustan Kazhagam, with the aim of bringing transparency in the functioning of democracy.

Jethmalani was the highest paid lawyer in India. He was known for his deep-rooted professionalism, and would argue the case for his client without a strand of fear.

Jethmalani had said in an interview that a lawyer is not paid for his opinion but it is his duty to present the case of a client honestly and efficiently. He held the audience spellbound during the course of his hearings and was known for his one-liners.

In 2017, he announced his retirement from the legal profession.

“Saddened by the passing of Ram Jethmalani, former Union Minister and a veteran lawyer. He was known to express his views on public issues with characteristic eloquence. The nation has lost a distinguished jurist, a person of great erudition and intellect,” President Ram Nath Kovind tweeted.

Prime Minister Narendra Modi called him “an exceptional lawyer and iconic public figure who made contributions both in the court and Parliament. He was witty, courageous and never shied away from boldly expressing himself on any subject”.  (Agency)