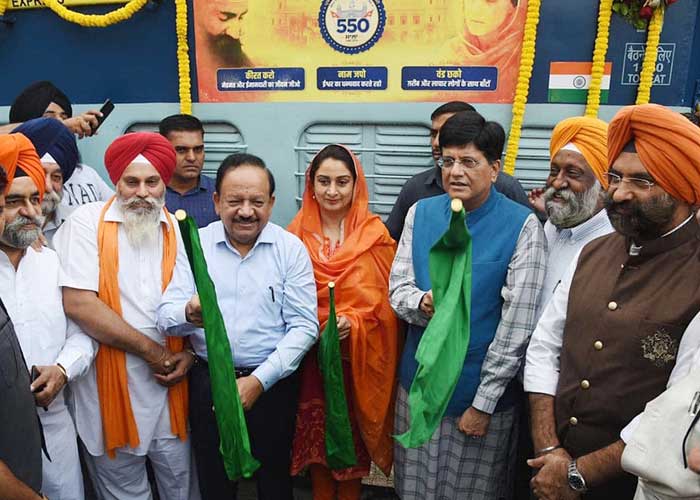 Earlier Mrs Badal had raised the need for starting a train service between New Delhi and Sultanpur Lodhi to facilitate pilgrims on the occasion of 550th celebrations of Sri Guru Nanak Dev ji. She had also urged the Railways ministry to name it as Sarbat da Bhala express keeping in view the core message of Guru Sahab as well as the sentiments of the people of Sultanpur Lodhi.

Thanking Prime Minister Narendra Modi and Railways minister Piyush Goyal for starting ‘Sarbat da Bhala’ train to spread the message of peace and communal harmony across the country, the Union minister said this was a historic day as this train would connect the pilgrims of Delhi, Haryana, and Punjab with Sultanpur Lodhi.

Terming Sultanpur Lodhi as the birthplace of Gurbani, Mrs Badal said it was here that Guru Sahab gave the message of ‘God is one’ and ‘no one is Hindu, no one is Muslim’ to humanity.

Speaking about the other initiatives taken by the Railways ministry to mark the 550th Parkash Purb celebrations of Guru Sahib, Mrs. Badal said apart from spending Rs.22 crore for up gradation of Railway station at Sultanpur Lodhi and constructing a museum there, 14 Special trains would be run between Hazur Sahib Nanded to Ferozepur. “Northern Railways will also run 12 Special trains for handling passenger traffic during 550 Years Prakash Purab celebrations” she added.

She also appealed to Railways minister to start a direct train between New Delhi and Sultanpur Lodhi, saying that it would make it convenient for pilgrims to return the same day after paying obeisance at the holy city.

Terming the Kartarpur Corridor as the Corridor of Peace, the Union minister wholeheartedly thanked Prime minister Narendra Modi for fulfilling the 70 years old wish of the Sikh community for ‘hassle-free access to Gurdhams’ which were separated from it during partition of the country. “Construction of the Kartarpur Sahib corridor is ample proof of Guru Sahib’s presence that he hears our prayers and fulfills them against all odds,” Mrs Badal added.

Delhi Sikh Gurdwara Management Committee (DSGMC) president Manjinder Singh Sirsa was also present on the occasion. Meanwhile the train was given a rousing reception at all stations along its route by the Sikh Sangat.