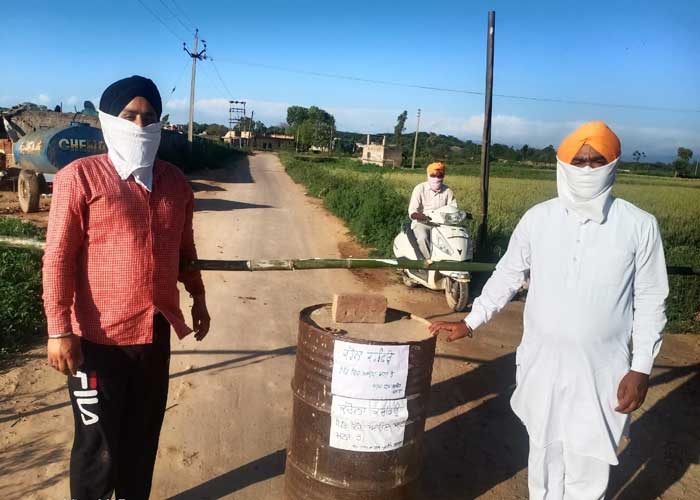 Leading the battle from the front against the ‘invisible enemy’ coronavirus, the local police have motivated people in at least 424 villages — almost 70 per cent of the total population — in this district to self-isolate to check the pandemic.

Setting an example, the police, led by district chief Swapan Sharma, are providing round-the-clock logistics support by training the youth on preventing human movement and disinfection of public places and also by maintaining supply of essential commodities.

As per official figures, 440 foreign travellers and non-resident Indians (NRIs) have been quarantined in Ropar district.

Out of 14 swab samples collected in the district, 11 have tested negative. The results of three tests are awaited, Sharma, who is the Senior Superintendent of Police, told on Tuesday.

The pre-emptive strategy by involving 1,200 volunteers has definitely worked as the district is surrounded by three ‘corona hotspots’, Sharma said.

The agrarian state of Punjab has a huge base of NRIs with almost 75 per cent of them haing their plush residential properties and landholdings especially in the Doaba region (the prosperous area between the Sutlej and Beas rivers) comprising the districts of Jalandhar, Hoshiarpur, Nawanshahr and Kapurthala.

For a majority of NRIs, visiting their natives places is the best way to escape the harsh winters of Europe, the US and Canada from November onwards.

This season too was no exception, many of them landed in hordes, maybe to escape coronavirus epidemic prevailing there, with a little attention to complying with the home quarantine advisory.

As per re-assessment carried out by the state health authorities, 55,669 international passengers came to Punjab from January 30 onwards.

Earlier, the government said no less than whopping 90,000 landed in the state in March alone.

One more person died from Covid-19 in Punjab on Monday, taking the toll to three. Forty-one people have tested positive in the state.

District police chief Sharma said youth clubs and volunteers in Ropar have been roped in with help of panchayats to keep a vigil on 74 per cent of the population and more to be included.

The volunteers are being informed about the latest guideline and procedures through social media groups which are administered from the police war room in Ropar, the district headquarters some 45 km away from the state capital Chandigarh.

According to Sharma, more than 30,000 packets of cooked food and 17,600 packets of dry ration have been distributed since the statewide curfew was enforced on March 24 to prevent the further spread of COVID-19.

“We are acting as a cohesive unit along with all sarpanches, lamardars, chowkidars and ex-servicemen of the villages to assess ground situation and paucity of essential supplies,” he said.

According to him, advisories of the Health Department and directions from the government are being announced on loudspeakers regularly from religious places in villages. The direct link of communication has helped tackling the situation effectively.

Another police officer Jagjeet Singh said at any point of time 500 packets of dry ration are readily available in district police office. One packet is equal to 14 meals.

Whenever there is a distress call on 112 regarding food, dedicated teams of the police swing in action and provide food packets to the needy, he said.

The panchayats have motivated people not to go out of village. No one is being allowed to either visit their relatives or let others to come to the village.

Gurcharan Singh, a social worker from Akbarpur village, said the state and the police have come out to assist the people in distress.

“Every problem is being addressed and people are cooperating. Some problems do arise but we solve them jointly,” he said.

One vehicle with all sorts of ration, vegetables and medicines comes to the village entrance twice a day for distribution, said an overwhelmed village head Jaswant Singh of Valamgarh.

“In case of emergency, we dial 112 and police response is quick,” he added.

To provide statewide emergency medical and routine services at the doorstep, the police have launched a police emergency services app (PESA) as a pilot project in Sangrur district, Director General Dinkar Gupta told.

He said the police chiefs in all districts are helping manage chaos and hunger during a 21-day national lockdown.  (Agency)