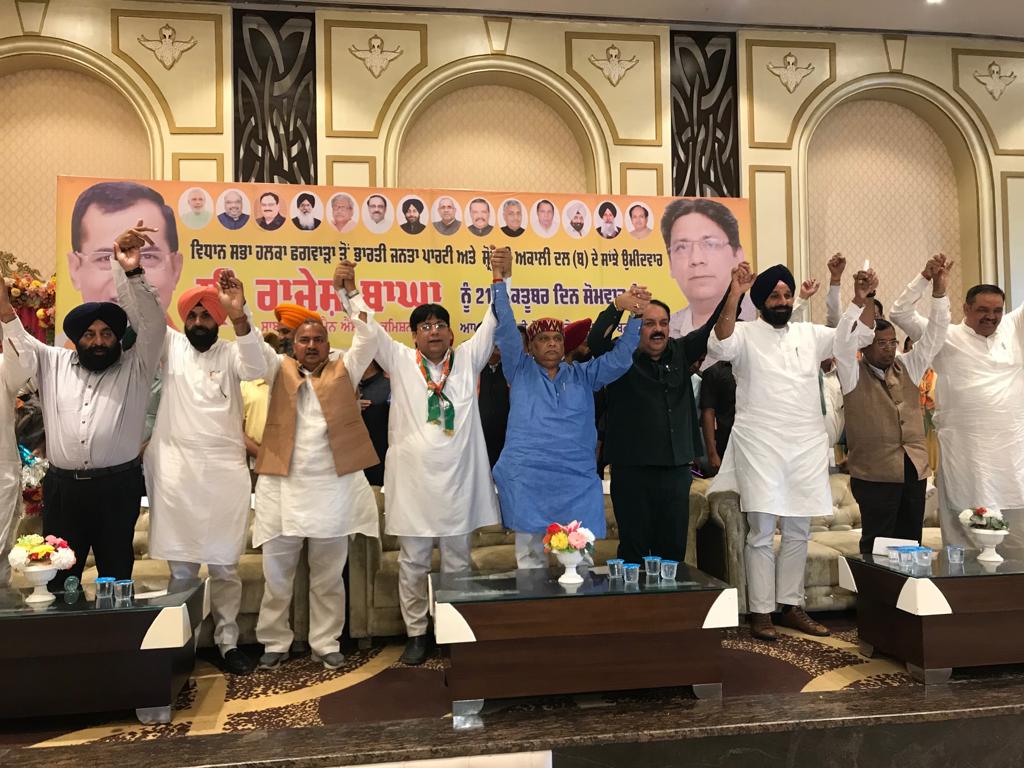 Former minister Bikram Singh Majithia today said Punjabis would make the Congress party pay for the betrayals of chief minister Capt Amarinder Singh and would vote for maintaining peace and communal harmony under the banner of the SAD-BJP alliance.

Addressing huge public rallies at Phagwara and Mukerian, Mr Bikram Majithia took chief minister Capt Amarinder Singh head on saying “a person who has betrayed Guru Sahab can never be trusted to keep his promises”, while highlighting how Capt Amarinder Singh had gone back on the promises made on the holy Gutka Sahab as well as ‘charan’ of Sri Guru Gobind Singh ji.

Asking the people if the chief minister had ever come to their constituency to listen to their grievances amidst cries of “no – no”, the Akali leader said the CM could not be expected to change his spots but in case the Congress party received a jolt in the forthcoming by elections, the CM might understand his responsibility and try to fulfill the promises made to the people. “The youth are still waiting for mobile phones which finance Minister Manpreet Badal promises are in the pipeline before ever election.

They are still waiting for the promised jobs under the ‘ghar ghar yojna’. The under privileged are waiting for ‘ghee’, tea leaves and sugar to be delivered to them under the ‘aata-daal’ scheme as promised.

Mr Majithia said instead of getting all this, the youth are not being given SC scholarship, girl students are not being given cycles. School children are being denied mid-day meals. Power rates have been inflated. All development is paralyzed even as investment into the State has stopped completely under Congress rule”.

He also stated that the Congress government had not even released Dearness Allowance to employees or given them sixth Pay Commission. Accusing Minister Charanjit Channi of lying by claiming credit for private jobs given to youth, the Akali leader said the minister said “we have been demanding the minister give a list of those given jobs but he has run away from doing so”. He said farmers were also being discriminated with sugar cane growers not getting Rs 750 crore due to them.

Stating that the SAD-BJP alliance stood for peace and communal harmony, Mr Majithia said the same was under threat under Congress rule because of its divide and rule policy. “Recoveries of AK-47s and grenades are taking place now, something which never happened during ten years of SAD-BJP government.

Drones from Pakistan are dropping weapons into Punjab”. He said instead of tackling such serious issues, the Congress government was content to keep its government running by appointing more and more Advisors.

Meanwhile the Akali leader assured the people that the SAD-BJP leadership would work with its full might to ensure the victory of BJP candidate Rajesh Bagha from Phagwara and Jangi Lal Mahajan from Mukerian constituency. Union minister Som Parkash, BJP President Shwet Malik and former minister Vijay Sampla also spoke on the occasion.