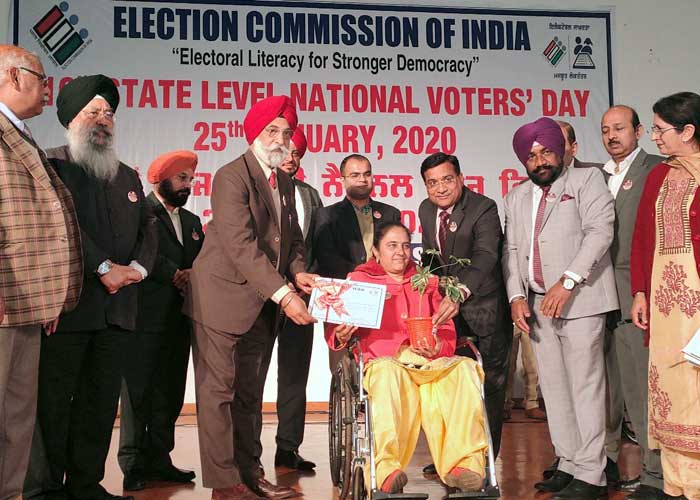 He was here to preside over the state level function organised to mark the 10th National Voters Day at Shivalik Public School Nawanshahr. He said that before independence we were not able to make our own policies and to elect our own goverments. After getting independence followed by democratic process, we got the right of vote and other welfare schemes.

Terming the voting right most important, he insisted upon to think before casting his/her vote for the candidate. He said that exercising franchise is not mere a physical exercise, we should give stress on our mind for the purpose.

Earlier, he adminsitered the pledge of National Voters Day to all the participants.

Deputy Commissioner, Vinay Bublani while addressing the gathering said that the constitution committee led by Dr. B R Ambedkar had given meticulous right to the residents of INDIA in the shape of voting right. Now its our duty to participate in democratic electoral process with zeal to choose our representatives. He said that main motive of the National Voters day was to include young, PWD and Third gender voters in damocratic elctoral process more exclusively.

During the function, the best performing DEOs, ADEOs, Police Officers and Media Partners given appreciation letters that were nominated by CEO Punjab for National Awards. These include DEO Jalandhar Verinder Kumar Sharma for Election Management, DEO Hoshirapur Isha Kalia for Election Management, DEO Pathankot Rambir for Electoral Roll Management, ADEO Jalandhar Jasbir Singh for SVEEP, SSP Sangrur Sandeep Garg for IT Initiatives and MY FM Radio (94.3) for Voter Awareness Campaign. The awards were given to these officers/representatives by Chief Guest Dr. Amarjit Singh Nanda, VC GADVASU.