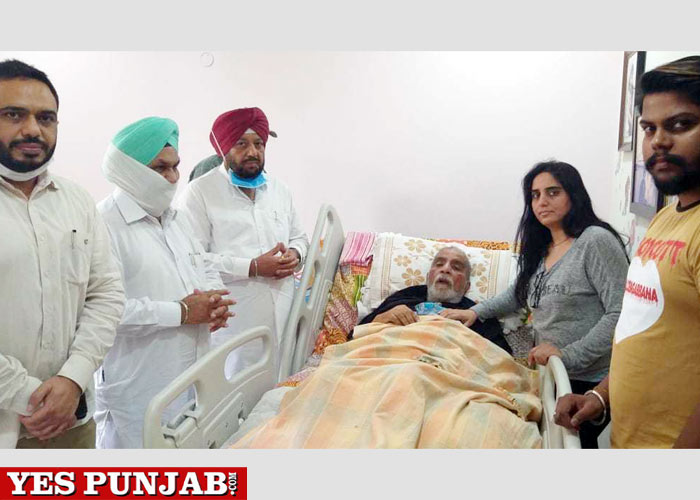 The family members of eminent Punjabi folk singer Mr K Deep (80) have urged the Punjab government for financial help. They said that due to his treatment for the last three months, they are under financial burden now.

Mr Bawa and Mr Dakha informed that they have brought this issue to the notice of Mr Tejveer Singh, Principal Secretary to CM Punjab, today who has asked the Deputy Commissioner Ludhiana to look into the matter.

They said that the Capt Amarinder Singh led Punjab government has always stood with the people who have brought laurels for our state and Mr K Deep is an institution in itself. They assured that the Punjab government would soon provide financial aid to the ailing singer.

Mr K Deep’s daughter Miss Gurpreet “Billy” Kaur informed that her father slipped in the house in the month of February 2020. His head hit the floor, due to which he had internal bleeding in the brain. Since then, he has been undergone two major operations, first one in March at DMCH and later at Deep Hospital.

She said that their daily expenditure on treatment is around Rs 22000, and till date, they have spent close to Rs 16 lakh on his treatment. She said that she has been taking care of her father all by herself and now, even her own financial situation is suffering. She requested the Punjab government to help her family financially so that Mr K Deep can get fully cured.

Kuldeep Singh, famous as K. Deep is a Punjabi singer. He sang most of the duets with his wife, singer Jagmohan Kaur. The duo is known for their comedy characters Mai Mohno and Posti. K Deep was born on 10 December 1940 in Rangoon (Burma) and his native village is Aitiana in district.