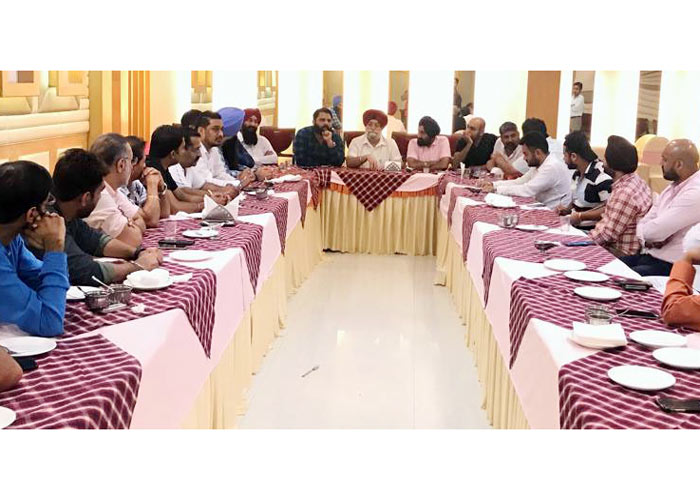 While the Punjabi film industry is still in its early days of experimenting and innovation, the producers of Punjabi films are working hard for the promotion of Punjab, Punjabi and Punjabiyat. The Punjabi film producers are also taking huge risk of heavy loss for financing the films. Along with this some actors, distributors and directors allegedly are cheating on them, causing huge financial loss to the producers. To avoid this and protect their rights, many active producers of Punjabi films had a meeting in which they decided to form Punjabi Film Producers Associations. Each producer was given the chance to share his views in the meeting.

Producers present at the meeting said that nowadays, one and more Punjabi films are being released every week and many Punjabi films are under production. Due to this new producers are facing many difficulties. They said that new producers are being cheated by some greedy artists and directors by showing them false dreams and later exploiting them which gave them big losses. Some distributors are also harming Punjabi cinema by making such frauds.

The producers said that every new producer makes his film with his full heart and put his best efforts and hard work, but when the cheating part comes in, he is left with no finance and he is forced to leave the field of cinema forever.

Members said that the organization would provide direction to the entire producer community in a very transparent manner and raise their voices for their rights.

The meeting discussed a number of agendas in which various forms of exploitation with producers were discussed. Members said that producers are being exploited by some distributors, actors, production directors and many other people associated with film line. To avoid this there was a demand of the time to bring this organization into existence so that the incoming new producers and the old producers who started the films could not be harmed.

They said that the organization will provide all possible assistance for the problems coming from cinema ie. Contract with the actors working in the films and will also talk to the government about digital fees and entertainment tax.

Speakers on the occasion said that complaints of cheating with many producers were also given by the producers to the institution yesterday, which will be investigated and a campaign will be launched against the culprits.

Speaking on the occasion, Charanjit Singh Walia said that he would fulfill this responsibility wholeheartedly. He said that he himself was the victim of this exploitation while making his first film. He said that it would be ensured that the rights of the producers could not be exploited in any way.