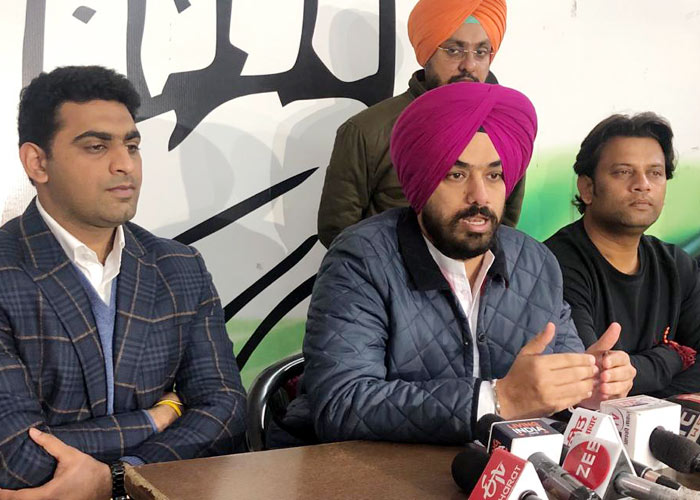 Chandigarh, Jan 21, 2020 (Yes Punjab News)
Punjab youth congress would draft youth policy and submit it to the Punjab Government within three months so that the promises made for the youth in the party manifesto are fulfilled and proper legislation are made to implement the policy. S. Brinder Dhillon, President Punjab Youth Congress announced this today at media briefing at Punjab Congress Bhawan, Chandigarh today.

The policy will be road map to the future of the thousands of youth of Punjab. Three major points will be covered under the policy. The policy would focus on employment melas to eradicate the problem of unemployment from the youth of the state. Bringing affordable education to the people of Punjab would be second major issue in the policy.

Thirdly the policy would focus on regularizing IELTS on the government level so that there is no problem to the students who are intending to study abroad.

Punjab Youth Congress (PYC) would take the fight against Citizenship Amendment Act (CAA) to streets of Punjab and make people awareabout this unconstitutional Act. S. Dhillon said that in its first phase Youth Congress would take out a ‘Bike Rally’ on January 23 from Gurdawara Sri Singh Shahidan Sohana, Mohali to Khatkar Kalan, the birth place of Shaheed-E-Azam Bhagat Singh under the command of Indian Youth Congress leader Mr. Bunty Shelke.

Sh Sunil Jakhar President Punjab Pradesh Congress committee will flag off the Bike rally. The Bike Rally would start from Sohana at 10 AM and route througb Landra, Kharar, Kurali, Ropar, Balachaur and Nawanshahar. He said that massive rally would culminate in a rally at Khatkar Kalan where tributes will be paid to the Shaheed-E-Azam Bhagat Singh.

He added that India got its freedom due to sacrifices of our martyrs. He said that Congress party was on forefront of freedom struggle. He further appealed to the all the political parties to also join this movement against the unconstitutional act of Modi Government.

Giving the details of the purpose of the Bike Rally S. Dhillon said that the motive of the rally will be to mobilize youth against CAA and to stop Modi government from implementing controversial National Register of Population (NRC) and National Population Register (NPR) in its present form.

BJP led government at center was working on divisive agenda to create communal hatred and deprive minorities and poor people of constitutional rights. He said that Congress would not allow anybody to violate the spirit of Indian constitution. Lambasting Shiromani Akali Dal for its double standards on the CAA act he invited SAD also to join the bike rally.