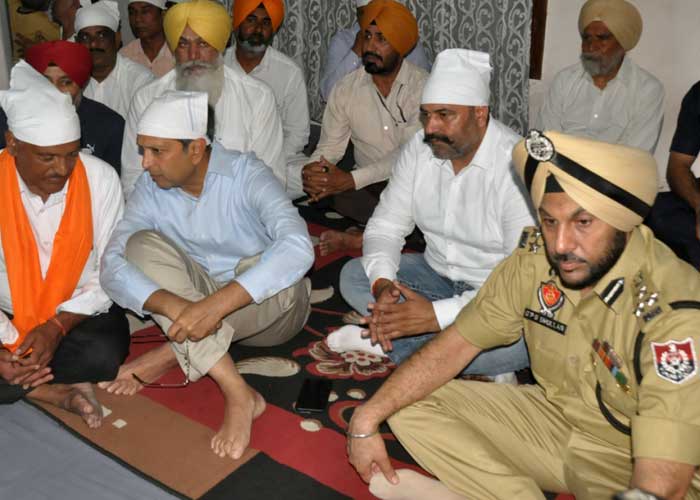 Director General of Police (DGP), Punjab Mr. Dinkar Gupta today said that the new policy for compensating kin of Police officers/ officials martyred during the ‘line of action’ would be introduced soon.

The Director General of Police, accompanied by Commissioner of Police Mr. Gurpreet Singh Bhullar, today attended the last rites of Head Constable late Mr. Gurdeep Singh, who had attained martyrdom on October 1 during an encounter with drug smugglers.

Addressing the gathering, the Director General of Police said that the Punjab Police was committed to extend a helping hand to the aggrieved families, who had lost their bread winner during the call of duty.

He said that the policy was under the active consideration of the Punjab Chief Minister Captain Amarinder Singh and would be finalized very soon. Mr. Gupta said that no stone would be left unturned for this noble cause aimed at ensuring the well being of the Police families.

Recalling the glorious tradition of the Punjab Police to serve the state and its people diligently, the Director General of Police said that till now around 1800 Police personnel had laid down their lives at altar of motherland.

He said that not only during the black days of terrorism but the Punjab Police has set a new benchmark of performing its duty efficiently, whenever it was required. Mr. Gupta said that the department would strive hard and continue to render its duty efficaciously.

Paying homage to the martyr, the Director General of Police said that he performed his duty heroically and attained martyrdom while fighting against the anti-social elements. He said that the culprits of this heinous crime would not be spared at any cost and severest of severe action would be taken against them. Mr. Gupta also assured fulsome support and cooperation to the family of martyr in this hour of grief.

In his address, Lok Sabha MP Chaudhary Santokh Singh also paid tribute to the martyr Head Constable. He said that the state government led by Punjab Chief Minister Captain Amarinder Singh was committed to help the distressed family in this hour of grief. Chaudhary Santokh Singh assured the family that the state government was at the beck and call of the family.

Paying tributes to the martyr, the MLA from Jalandhar West Mr. Sushil Kumar Rinku said that no stone would be left unturned to help the family in this hour of grief. He said that the supreme sacrifice made by the martyr would be ever remembered by one and all. Mr. Rinku said that the martyr had inherited the passion for serving the motherland from his father Mr. Jagjit Singh, who had superannuated from the para-military force as Sub Inspector.

On the occasion, the Director General of Police, Lok Sabha MP, MLA, Commissioner of Police and others also consoled the family members of martyr including his father Mr. Jagjitr Singh, mother Mrs. Kaushlya Devi and wife Mrs. Navneet Kaur.