Home Punjab Punjab to be front runner in Plantation in Country: Dharamsot 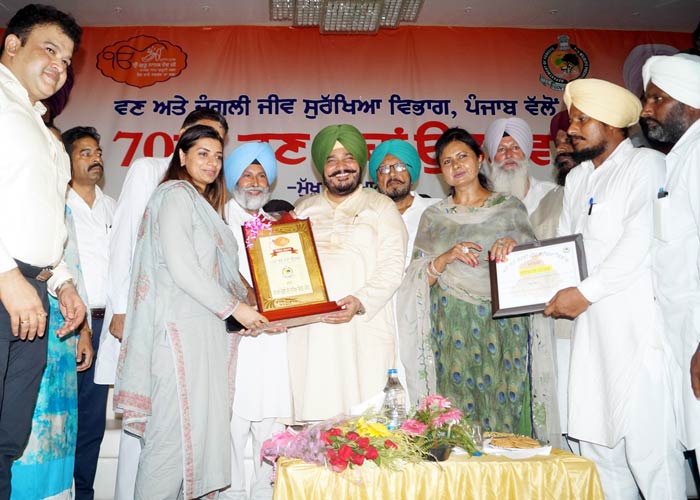 Addressing the gathering at occasion Mr Sadhu Singh Dharamsot said the day is being celebrated as Van Mahotsav to mark the commitment for turning earth greener.

He added that the Punjab government was observing 550th birth anniversary celebrations of Guru Nanak Dev Ji by ensuring that at least 550 saplings are planted in every village of the state. Using the Japanese Miyawaki technique, Nanak Gardens (Nanak Bageechi) are being planted at various places in the state. Till now 70 lacs saplings have been planted. Similarly of the 13300 villages of state, more than 62 lacs saplings have been planted in 11000 villages.

Besides this more than 70000 tall plants have been planted along the link roads with tree guards. Also efforts are being done to promote medicinal plantation. To create better awareness about medicinal plants, herbal gardens are being set up in 232 schools at a cost of Rs 122.96 lacs.

Under National Ayush Mission Punjab farmers are being given financial help for planting medicinal plants. Besides this free plants are being provided under Ghar Ghar Hariyali and I Hariyali mobile application.

In order to ensure better monitoring of the development and management of forests, Drone Technology is being used. To ensure a cleaner environment, government is promoting use of bio fuel. Also in association with the Himalayan Forest Research Institute Shimla, the Punjab government is working on plan to clean and maintain Sutlej and Beas.

He called upon the representatives of various NGOs and religious organizations to plant maximum saplings for greener and healthier Punjab. He added that the way Punjabis have led nation in sacrifice for the country, it is now leading in plantation and turning the earth greener.

Samvad Theatre group from Chandigarh presented a play on environment conservation. The forest department’s SHGs held exhibition at the event. Besides this Minister Mr Sadhu Singh Dharamsot flagged off ten trolleys laden with saplings that will distribute these free of cost in villages.

On this occasion, 15 officers and employees of the forest department were honored for exemplary work in getting government land free from encroachment and promoting plantation under 550 years of birth anniversary of Guru Nanak Dev Ji. 14 village gram panchayats were also honored for their appreciable work in the field of plantation.