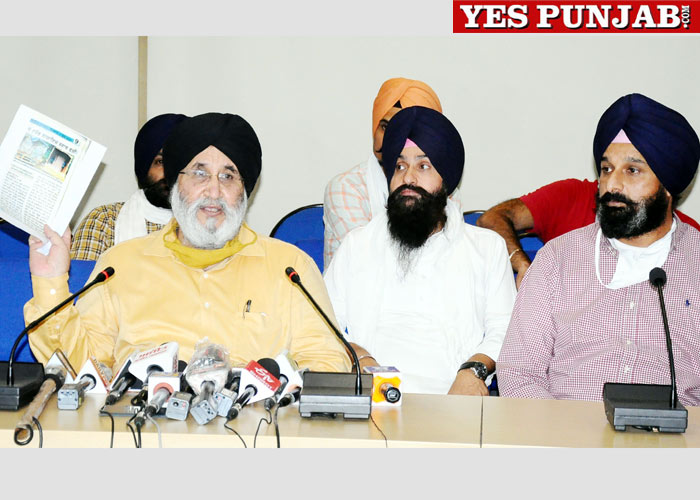 The Shiromani Akali Dal (SAD) today demanded immediate compensation for the Rs 4,000 crore likely losses suffered by farmers of Punjab in the inter-State Seed scam even as it proved that Karnal Agri Seeds Company, which was the main culprit in the Seed scam, had registered a fake address as it branch office in Haryana.

Addressing a press conference here, former minister Bikram Singh Majithia said if one were take into account that spurious PR 128 and PR 129 paddy variety seed was sold to only around 15 per cent farmers in Punjab, the extent of the fraud came to above Rs 4,000 crore. He said he was calculating this on the basis of the Rs 30,000 crore Cash Credit Limit (CCL) extended to Punjab by the centre to procure paddy grown on 60 lakh acres.

Giving further details, Mr Majithia disclosed that the 850 quintal of spurious seed recovered from Brar Seeds Store alone as per the Ludhiana chief agricultural officer had caused a loss of Rs 105 crores to farmers as it would have been grown on 21,000 acres. “There are at least 1200 big seed stores in Punjab and most of them had been supplied spurious seed by the inter-State gang headquartered in Dera Baba Nanak”.

The SAD leader said keeping in view the magnitude of the fraud perpetrated on farmers the Punjab government should immediately forward the case to the CBI or hand over the inquiry to a sitting judge of the high court. He also urged the Haryana and Rajasthan governments to probe the scam and save farmers of their States who had been cheated by the scamsters.

Mean while the Akali leader said the present inquiry into the Seed scam seemed to be a big cover up exercise. He said the proprietor of Brar Seeds had been arrested after 20 days but light bailable offences were registered against him deliberately. He said Brar Seeds was guilty of forgery and criminal breach of trust but these sections had not been included in the FIR.

Speaking about the role of Karnal Seeds, he said despite the fact that its owner Lucky Dhillon was the main accused in the scam; he was allowed to do press conferences to present false bill books to the media. He said Cabinet minister Sukhjinder Randhawa also helped Lucky by presenting the same bill books to the media in Chandigarh.

“All this as well as pictures showing their proximity proves that Randhawa has an interest in the firm and is a benaami partner in Karnal Agri Seeds”. He said only custodial interrogation of Lucky and an independent agency could reveal the duplicate bill books being used by him to hide his criminal acts.

Mr Majithia on his part made it clear that the SAD’s priority was to save the livelihood of farmers adding the Congress government was working against its promise of “karja kurki khatam fasal ki poori rakam”. He said farmers could never get full price for their produce till unscrupulous elements were allowed to cheat them in this fashion. “Farmers will never forgive the Congress party for this assault on their very livelihood”, Mr Majithia added.