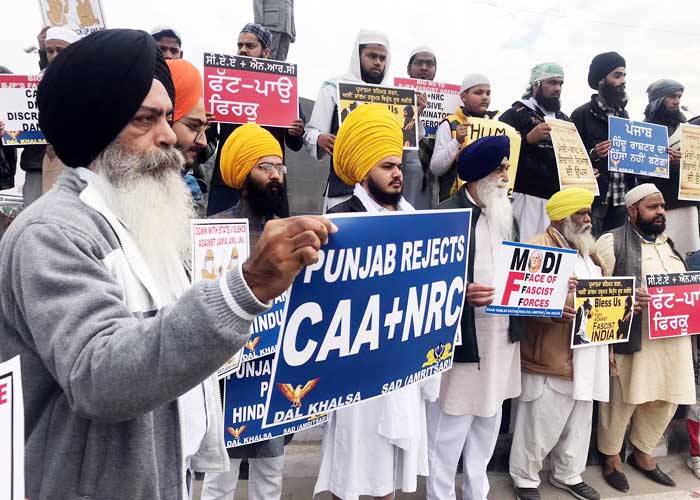 Responding on the call of Dal Khalsa and SAD (Amritsar), the people of the city observed shutdown to protest against BJP’s Hindu rashtra agenda and CAA plus NRC.

The traders shut their business establishment and observed nearly complete bandh in the city. The bandh was peaceful. The protesters took out a march from Bhandari bridge to Golden Temple.

They were joined by large number of Muslims, members of BAMCEF and followers of Bhagat Ravidas ji Maharaj. Leaders of both the parties thanked people for positively responding to their bandh call.

Speaking at the protest site, Cheema said by observing the bandh, the people of Punjab had registered their protest against CAA plus NRC and Sangh’s agenda of Hindu rashtra and to reiterate that Punjab won’t be part of the theocratic Hindu state”.

Terming the controversial law divisive and discriminative, Kanwar Pal Singh said the Modi-Shah duo has shown their stubbornness to implement CAA by suppressing the protesters with brute force and maligning them by name calling.

We are determined to contest and challenge Govt’s autocratic attitude, said he. He declared that the shutdown is a verdict of Punjabi people on fascists and divisive policies and decisions of Modi Govt-2.

Justifying their call for bandh, he said this government has betrayed Sikhs by not releasing prisoners that have completed their prison terms, and failure to book the cops that unleashed brutality on Jamia, AMU and JNU students.

To drive their point home, Dal Khalsa leaders said today large number of Muslims, Hindus, Dalits and Sikhs of Punjab had come together to speak in one voice and to reject CAA and BJP’s communal agenda of Hindu Rashtra.