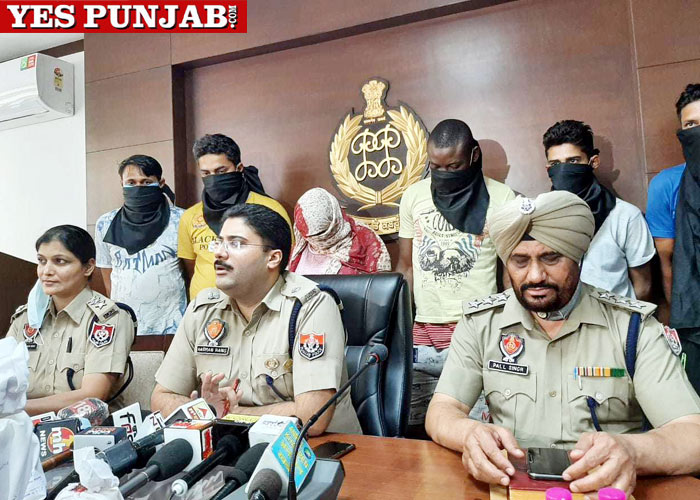 As part of its commitment to eradicate the drug menace in accordance with the directions of the State Government, the District Police under the leadership of SSP Mr. Kulddep Singh Chahal has landed a big success with the arrest of 6 heroin suppliers.

Disclosing this here today, the SP (Investigation) Harmandeep Singh Haans said that the Inspector Rajesh Kumar of CIA Staff, Kharar had on a tip off registered a case u/s 21-61-85 of the NDPS Act at Police Station, City Kharar and were checking the vehicles at Village Chhajjumajra Road on 28-5-20 when 2 car borne people tried to escape on seeing the police party but were nabbed.

The interrogation of the accused resulted in the arrest of another heroin supplier, a nigerian named David on 31-5-20 from Delhi and 2 kg 200 gms of heroin was seized from him. So, the total quantity of heroin seized comes to 3 Kg and 500 Gms whose price in international market is Rs. 18 crore.

The accused were active since very long time in Punjab, Chandigarh and Haryana and were supplying heroin. One of the accused Dalwinder Singh is supplyig heroin since 4 years and has 2 cases registered aginst him at Police Station Sardulgarh and Police Station City Sirsa under NDPS Act and another case under section 420.

He along with anjul sodhi and neelu, used to bring heroin from Delhi and sell the same at very high prices. Another accused Ravi verma and Parivar Singh used to supply their consignment in Mohali and Chandigarh areas. Further investigations are on this case.