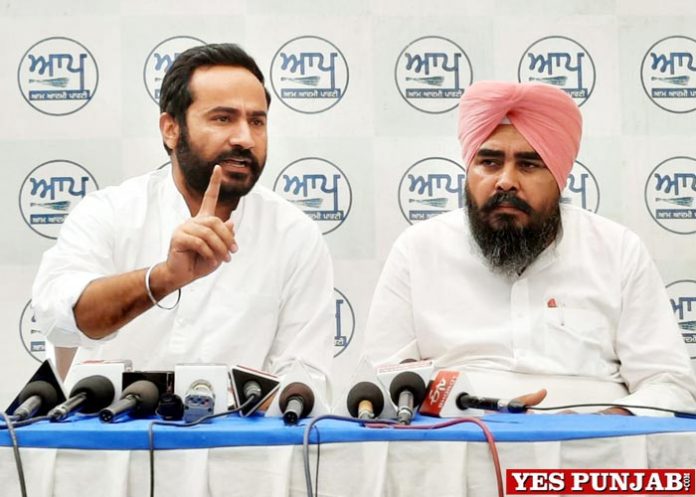 Chandigarh, April 9, 2021 (Yes Punjab News)
Criticising the centre and Captain Amarinder Singh’s government for the ongoing direct payment of crops, the Aam Aadmi Party (AAP) MLA and Youth Wing president Gurmeet Singh Meet Hayer and MLA Amarjeet Singh Sandoa said that both the governments were working together and were befooling the farmers and arhtiyas.

Addressing a press conference convened at the party headquarters here on Friday, the AAP MLAs said that Captain Amarinder Singh had been making false promises to the farmers of Punjab for a long time that there will be no direct payment this season but now his ministers were denying it.

They said that it was unfortunate that during the recent meeting of three Punjab ministers with Union Minister Piyush Goyal, Captain had not taken a firm stand for Punjab. “Like Prime Minister Narendra Modi, Captain Amarinder Singh is also lying on every step,” they added.

The AAP leaders further said that PM Narendra Modi had claimed and promised in the Parliament that there is and will be MSP on crops, but the farmers of Punjab seized hundreds of trolleys loaded with wheat at various places, which was procured from other states at a lower price than the MSP and exposed Prime Minister’s false claims and promises.

They said that the practice of buying cheap crops from other states and selling them at high prices in Punjab was being carried out by the crop mafia under the auspices of the BJP government at the Centre and the Congress government in Punjab. “The crop mafia has the patronage of the ruling party,” they added.

They said that Punjab CM Captain Amarinder Singh and his ministers were running their illegal businesses during the night curfew and looting the economic resources of Punjab. Responding to the queries of the media persons, MLA Meet Hayer said that during the paddy season in the state about 50,000 tonnes of surplus paddy was sold in the mandis of Punjab but the Congress government did not take any action.

“Instead of punishing the culprits by forming inquiry committees, the government gives them clean chit,” he added. MLA Amarjeet Singh Sandoa said that the farmers of Ropar district seized 45 trolleys of wheat on the night of April 8, which was imported from outside states.

He said that the farmers had informed that since April 1, trucks full of wheat were coming from outside the state every day but no action was taken by the government or the administration.

The leaders further said that the Aam Aadmi Party will not allow the plunder of the farmers nor will it allow the interests of the state to be tampered with. They demanded the state government to conduct a high level inspection of the wheat trolleys seized by the farmers and punish the officers and leaders involved in the scam.