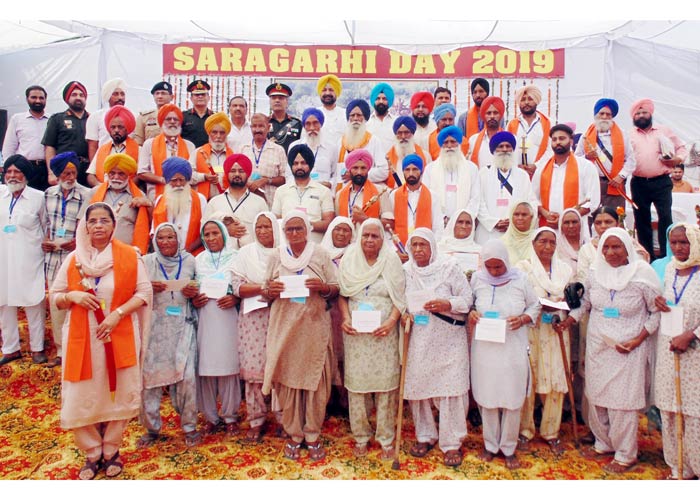 On the eve of Saragarhi day, a state-level function was celebrated at the Saragarhi Memorial Ferozepur in the leadership of Health Minister Balbir Singh Sidhu on Thursday. Addressing the gathering at the historic memorial, the health minister said that the nation can never forget the sacrifice of 21 brave soldiers of Sikh Regiment, who laid their life fighting a consignment of 10,000 armed opponents in the greatest war ever fought.

He added that the Saragarhi war is listed among the world’s ten deadliest wars and this will keep motivating our new generations to come forward for the service of the nation.

Mr. Sidhu released the grant of Rs. 1 crore for the development, beautification, and modernization of the memorial and handed over an official letter to Deputy Commissioner Ferozepur Chander Gaind.

Divulging more, the minister said that it was the vision of our Chief Minister Captain Amarinder Singh to celebrate state-level function on this historic day, so that message of bravery and velour expressed by our soldiers can be imparted throughout the world, adding he said that on Chief Minister’s direction another amount of Rs. 2 Crore will be spent on the establishment of an interpretation center-based tourist facilitation center.

He further added that the historic railway station of Hussaniwala will also be restored, which has been decided in a meeting held under the chairmanship of Chief Minister Captain Amarinder Singh and soon funds will be released to concerned authorities for these development projects.

The health minister also felicitated Descendents of 21 martyrs of Saragarhi fight besides providing financial aid to the families of martyrs of Kargil war.

Interacting with the media, Mr. Sidhu said revealed that the state government has completed all the procedures to set up a PGI center at Ferozepur and expressed hope the center will soon be functional besides rebuking the previous government for not taking up this matter in the interest of the general public. Mr. Sidhu reiterated the commitment to provide batter health services to the people of Punjab and said there will be no constraint of funds in this task.

The health minister lauded the efforts made by the district administration to modernize the emergency and gayni ward of the civil hospital and added that other ward will be modernized soon and a new model civil hospital will be handed over to the people of Ferozepur.

Speaking on enhanced penalties on the violation of traffic rules, Mr. Sidhu said that this matter was quite serious and any kind of decision will take up only after due discussion in the interest of people of Punjab as the government was not going to take a one-sided decision on this crucial matter.

In the end, the minister inspected the exhibition counters set up by various government departments regarding pre-people schemes and asked officials to take the benefit of these schemes to the doorstep of beneficiaries.

MLA Parminder Singh Pinki paid his obeisance to the martyrs of Saragarhi war and hailed Captain Government’s decision to celebrate this event as a state-level function. He said that this war will keep inspiring our generations to come forward for the service of the nation in the hour of crisis. Deputy commissioner Chander Gaind extended the vote of thanks to the Chief Guest and other guests for their auspicious presence on the occasion. On the occasion MLA Kulbir Singh Zira, chairman Saragarhi Memorial Trust Major General Amit Loomba, Divisional Commissioner Ferozepur Sumer Singh Gurjar, IG Punjab Police B. Chander Sekhar, SSP Ferozepur Vivek S. Soni were present.