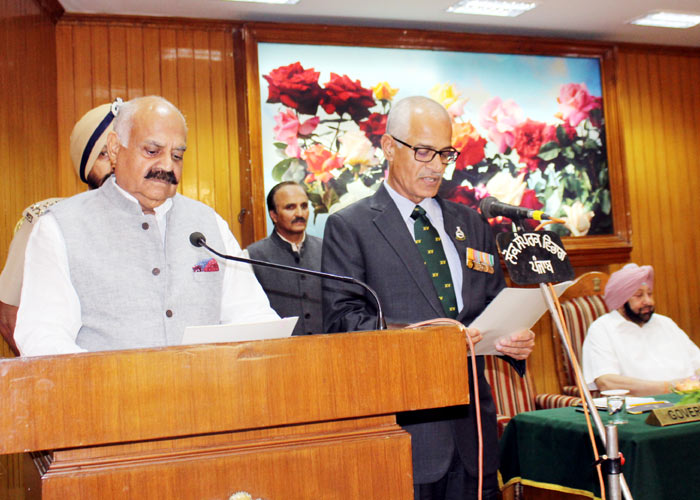 Earlier, the Punjab Chief Secretary, Mr. Karan Avtar Singh sought the permission of the Governor to start the swearing in ceremony. Soon after being sworn in Justice Vinod Kumar Sharma as Lokpal, Punjab and Lt Gen. (Retd.) Ajae Kumar Sharma as State Information Commissioner signed the oath, which was counter signed by the Governor.

Justice Vinod Kumar Sharma, had served as the permanent Judge of Punjab and Haryana High Court from 2006 to 2010. After that, he remained Permanent Judge High Court of Judicature at Madras from 2010 to 2013. In 2013, he was designated as Senior Advocate by the Supreme Court of India.

While, Lt Gen. Ajae Kumar Sharma had an illustrious military career spanning 38 years. He commanded an Infantry Brigade in the North East and had the distinction of Commanding Multi-National Brigade in DR Congo as the part of United Nation. Lt Gen. Ajae Kumar Sharma pioneered the implementation of Right to Information Act in the army when this Act was enacted in 2005.

The family members, friends and well wishers of newly appointed Lokpal and State Information Commissioner were also present in the swearing in ceremony.

High-tea was also served to the guests at the Punjab Raj Bhavan after the ceremony.