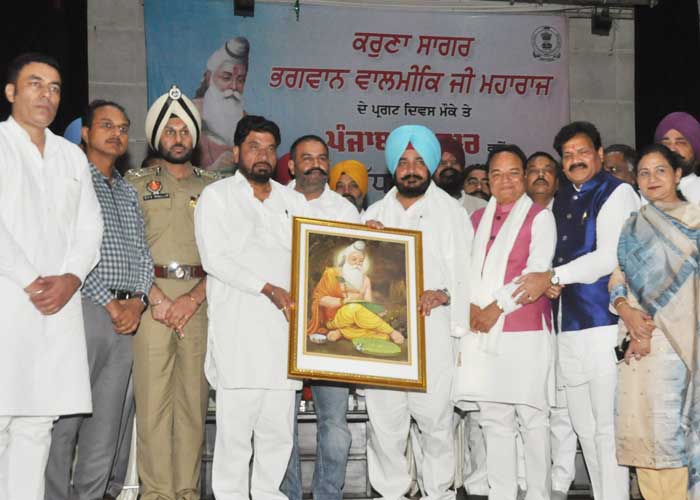 Forest and Social Justice Minister Punjab Mr. Sadhu Singh Dharmsot today said that the state government led by Punjab Chief Minister Captain Amarinder Singh was duty-bound to implement 85th amendment to the Constitution for the benefit of the Dalit community.

The Minister, who was here to preside over a state level function to mark pargat diwas of Bhagwan Valmiki ji, said that the Chief Minister had implemented the 85th amendment during his previous tenure for providing reservation in promotions to the officers/ officials of the Schedule Caste community in Government jobs.

He said that now also the Chief Minister was fully committed to implement this amendment in true letter and spirit adding that the amendment would be soon implemented. Mr. Dharmsot also asked the MPs and MLAs from the Schedule Caste community to jointly flag this case again before the Chief Minister.

The Minister also said that the state government was preparing a comprehensive plan for the further development of Sri Valmiki Tirath at Amritsar. He said that water treatment plant would also be soon installed at the sacred sarovar at this place. Mr. Dharmsot also announced a grant of Rs 21 lakh for the construction of Valmiki Community Hall falling in Jalandhar West assembly segment of the city.

Training his guns at the NDA government in the centre, the Minister said that the Union government was hell bent upon snatching the reservation, which was given by the Congress party, from the Schedule Caste community.

He said that the entire community would have to unite to thwart any such attempt. Mr. Dharmsot also slammed the Union government for its anti-dalit policies.

Exhorting the people to follow the path and ideals shown by Bhagwan Valmiki ji, the Minister said that ‘the Adi Kavi’ preached the message of equality and universal brotherhood, to carve out an egalitarian society.

He said that Bhagwan Valmiki Ji Maharaj was first poet or the Adi Kavi of the world who by his immortal and masterpiece composition the “Ramayana” propagated the message of victory of good over evil.

Mr. Dharmsot said that teachings of Bhagwan Valmiki Ji Maharaj lays stress on the equality in the society along with the ethics of what an ideal man, ideal ruler and ideal people should follow for the formation of an ideal state or society.

In his address Lok Sabha MP Chaudhary Santokh Singh said that it was a rare honour that the state government has organized this mega event here at Jalandhar to commemorate the pargat utsav of Bhagwan Valmiki Ji.

He said that Bhagwan Valmiki ji through his immortal composition the Ramayana has from centuries taught the way of life to the people and has been a lighthouse of the ethical and moral living for the people which were far more relevant in the present materialistic society.

Chaudhary Santokh Singh also slammed the Modi government for its anti-dalit stance adding that the Union government was discontinuing all welfare schemes started by the Congress government.

He said that it also act as a lighthouse to guide the destiny of our youth through the great ethical and moral values preached by him. Dr. Verka said that the teachings of Bhagwan Valmiki ji were the most relevant in today’s era to cement the bonds of communal harmony, peace and brotherhood.

They assailed the Modi government for depriving the Schedule Caste Community from its rights. They said that the stopping of funds for the post-matric scholarship scheme was a well organized conspiracy to deprive Schedule Caste students from higher education.