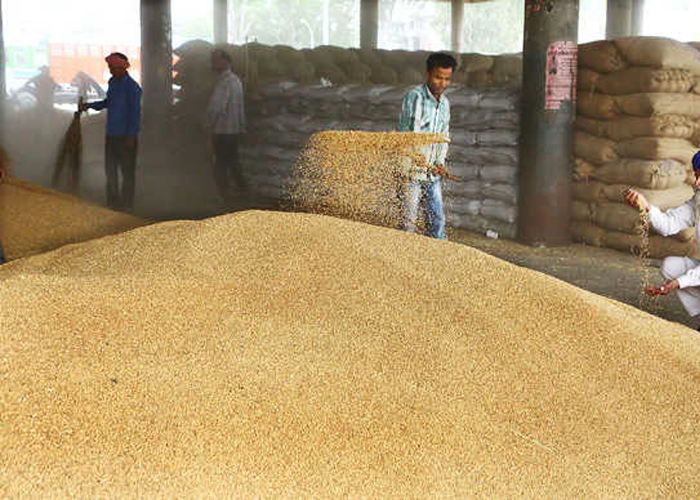 With almost completion of harvesting and procurement operations even in the face of several challenges amid COVID-19, lakhs of farmers have set a new example of unprecedented restraint and compliance during the wheat procurement in the state mandis without flouting prescribed health protocol.

Disclosing this here today, the Additional Chief Secretary Development Viswajeet Khanna said that 92 percent of the total expected arrival of 135 LMT has been achieved with 122.02 LMT arrived in mandis so far, out of which 121.85 LMT purchased during a month despite staggered movement of wheat amid corona pandemic.

ACS said that total 22 districts in Punjab, more than 95 percent procurement of wheat had been successfully accomplished in 15 districts including Pathankot (105%), Jalandhar (102%), Faridkot, Ludhiana and Barnala (99%), Sangrur (97%),Hoshiarpur & SBS Nagar (96%) and Ferozepur (95%). As many as 16.80 lakh passes have been issued to farmers so far through Arthiyas in the state, he added.

However, Khanna said that the state government has also decided to continue the procurement operations up to May 30 and if needed, the same could be extended till June 15 in view of staggered movement of wheat due to COVID-19 restrictions. Expressing immense satisfaction over the completion of 92 percent of procurement operations, Khanna hoped that the expected target of 135 LMT of wheat procurement would be accomplished shortly.

Highly complimenting the contribution of state farmers for record arrival and procurement of wheat crop in a seamless manner, the ACS pointed out that they were the key players throughout the ongoing procurement operations amid COVID-19 restrictions, who sincerely adhered to the health safety measures both during harvesting and procurement.

Khanna further stated that our farmers had made stupendous efforts in accomplishing one of the major procurement operations in India by making huge contribution in the Central Pool especially in trying circumstances of COVID-19.