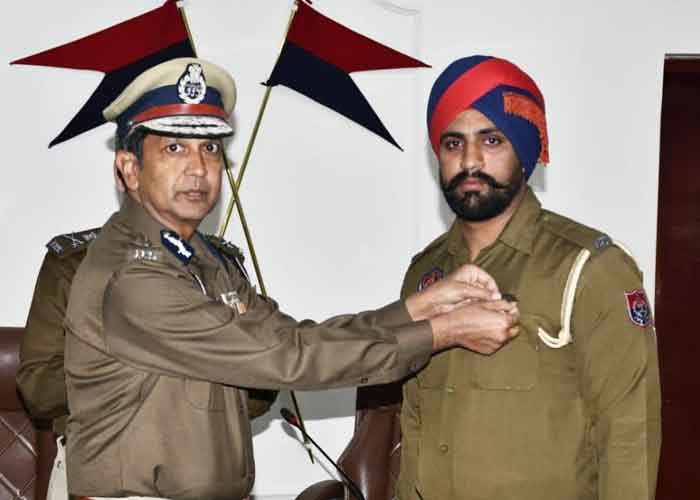 In a bid to further boost the morale of police officers who work exceptionally and diligently, Punjab DGP Dinkar Gupta has launched a monthly “Appreciate and commend” scheme to recognise ‘Punjab Police Performers’ of the month.

Disclosing this here today, Gupta said that this initiative was launched during the high level meeting of top brass of the Police at PPA Phillaur on Friday and 15 police personnel, including three women Sub Inspectors were honoured with the DGP’s Commendation Disc. The awardees included two Inspectors, six Sub Inspectors, three Assistant Sub Inspectors, one Head Constable and three Constables.

The DGP said that the performance of these personnel had been rated outstanding in various policing areas, such as action against terrorists and gangsters, arrest of Proclaimed Offenders, large number of NDPS recoveries, Property forfeiture in NDPS cases, spreading Drug Awareness, investigation of sensitive cases, Community Policing initiatives, Police Station management, etc.

Gupta said that the aim behind the scheme was to recognize the outstanding and professional work being done many Punjab police personnel during the course of their duties and to motivate the rank and file of the force of the border state, which faces immense security challenges. He hoped that the Scheme would go a long way in motivating the police personnel to further excel in their profession by giving outstanding performance.

Gupta said he planned to make this initiative into a monthly feature and would personally interact with the awardees and also host a lunch for them at the Punjab Police Headquarters in Chandigarh.

Nominations will be sought from Police Chiefs of various districts by 25th of every month, and these will be screened by a Committee comprising senior Police Officers from the headquarters and the field. The names would be announced by the 5th of every month.