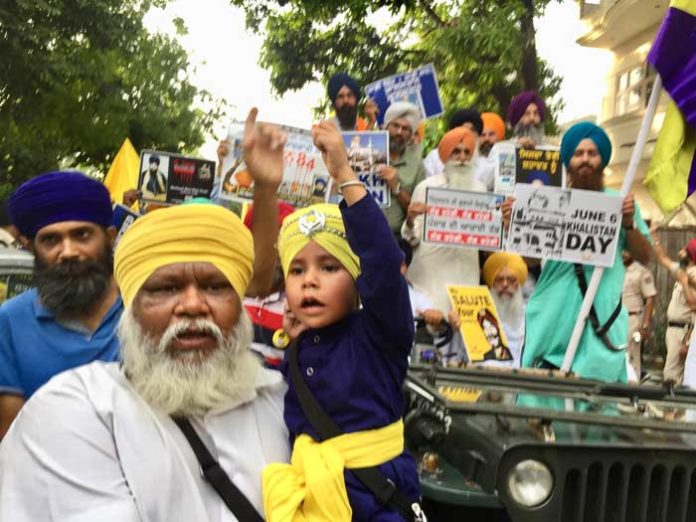 Tension prevailed in this Sikh holy city of Punjab on Thursday as hardliners, brandishing swords, raised pro-Khalistan slogans inside the Golden Temple complex on the culmination of special prayers to mark the 35th anniversary of Operation Bluestar.

Thousands of devotees early in the morning thronged the Akal Takht — the highest temporal seat of Sikh religion — to attend the ‘bhog’ ceremony of religious prayers that began on June 4.

The prayers were to mark the anniversary of Operation Bluestar that was carried out in June 1984 by the Indian Army to flush out heavily armed terrorists from inside the Golden Temple complex.

Security agencies were put on high alert in and around this city in view of the anniversary.

Punjab Police, paramilitary forces and intelligence personnel were stationed at different locations across the city, particularly around the Golden Temple complex.

The radical Sikh organisation Dal Khalsa called for a shutdown in Amritsar to protest against the Army action.

A day ahead of the anniversary, the Jathedar said Parliament should accept that the attack carried out on the directions of the Indian government was a blunder and should submit an official apology for it.

“The Indian Parliament should bring ‘maafi da matta’ (an apology resolution) for the execution of Ghallughara (Operation Bluestar) in 1984,” he said in a statement.

On the anniversary of Operation Bluestar in 2014, a clash between radical Sikh activists and the task force of the SGPC had taken place in which several people were injured in the Golden Temple complex.  (Agency)