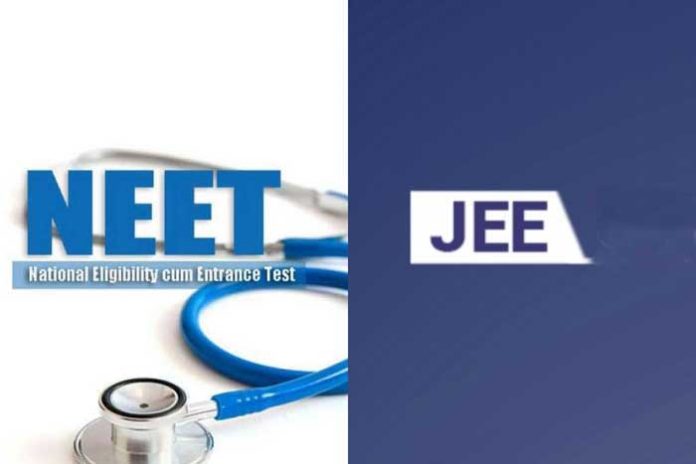 The National Eligibility-cum-Entrance Test and the Joint Entrance Exam are supposed to be an academic affair where the only concern should be on cracking it. But 2020 is no normal year and the hysteria over the coronavirus pandemic has given way to political opportunism as most opposition leaders including Mamata Banerjee, Sonia Gandhi and the Thackerays have come together to target the Centre.

Calling the Centre “ever insensitive”, major opposition party Chief Ministers have come together and made this academic affair a political playground where the theatre of CMs versus the Centre is being played out with emotions.

Two of the main players in what is seemingly going to be a political war — Mamata Banerjee and Sonia Gandhi — brought others like JMM’s Hemant Soren and Shiv Sena’s Uddhav Thackeray together to demand what Congress leader Rahul Gandhi calls an “acceptable solution”.

Earlier this week, Maharashtra Tourism Minister Aaditya Thackeray wrote to Prime Minister Narendra Modi, seeking his personal intervention to defer the exams in view of the health risks both for students and their families.

While Sonia called the Modi government’s handling of the issue as “uncaring”, Mamata Banerjee went a step further and asked Chief Ministers to jointly move the Supreme Court. “The exams are in September. Why should the lives of students be put at risk? We have written to the PM, but there has been no response,” she said in Wednesday’s meeting.

Striking a defiant note at the virtual meet, former NDA ally and Maharashtra Chief Minister Uddhav Thackeray told Sonia, Mamata and others that “First we will have to decide ‘Darna hai ki ladna hai, ladna hai to ladna hai’ (Whether we will be afraid or fight…If we decide to fight, we better fight).”

The Congress has also decided to stage protests on Friday morning in front of central government offices in state and district headquarters protesting against these exams. Reiterating its strong opposition to the same, Congress MP and AICC General Secretary K.C. Venugopal termed the Centre as “ever insensitive and mindless” on Wednesday.

Meanwhile, the NSUI is also planning an indefinite hunger strike against this “unilateral move” by the Centre. Calling it a “mindless and dictatorial move of the central government”, the state units of the Congress have decided to also take the protests online with an organised online campaign, ‘Speak Up For Student Safety’ where videos and posts against this decision will be posted on the party’s various social media handles on Facebook, Twitter, Instagram and YouTube among others.

In Maharashtra, state minister and Congress leader Ashok Chavan said that while exams are very important, the health and safety of the students is equally important.

“Since coronavirus has not yet come under control, the demand to postpone the JEE-NEET exams is definitely justified. The central government and Supreme Court must rethink on the issue,” said Chavan.

Aaditya Thackeray, who heads the Shiv Sena’s youth wing Yuva Sena, along with ruling Nationalist Congress Party leaders, has gone a step ahead and demanded that the entire academic year be postponed.

While the Union Education Ministry continues to defend its stance citing the Supreme Court order that dismissed a petition seeking postponement and suggested that postponement of the exams is not a solution as the pandemic is here to stay, non-Congress and non-BJP Chief Ministers who have traditionally helped the BJP in Parliament, like Odisha Chief Minister Naveen Patnaik, but his stand now makes it a bit tougher for the ruling dispensation.

Patnaik on Thursday requested Prime Minister Modi to postpone the JEE Main and NEET examinations in view of the prevailing Covid-19 situation and the floods in many parts of his state. Earlier, the Chief Minister had also written a letter to Union Education Minister Ramesh Pokhriyal Nishank requesting him to postpone the two exams.

But Vineet Joshi, the present Director General of the National Testing Agency (NTA), has his reasons to disagree. He said, “First the exams were to be held in April-May. We postponed it to July due to the pandemic. Then it was further postponed to September on the demand of students. Now, if we want these exams to take place, they should be held in September itself with adequate SOPs. How long can we continue to postpone?”

On Wednesday night, more than 150 academicians from premier institutes like JNU, BHU, Jamia Millia Islamia, and Delhi University among others wrote to Modi throwing their weight behind the government’s decision, which has emboldened the government in the face of the opposition’s onslaught.

In BJP-ruled Uttar Pradesh, Deputy Chief Minister Dinesh Sharma, who also holds the higher education portfolio, unsurprisingly said, “The Centre has taken a decision and we agree with it completely. The careers of lakhs of students cannot be jeopardised. We will conduct the examinations with full safety protocols.”

But the Samajwadi Party is opposed to it as party chief Akhilesh Yadav said that with public transport not running in full force, it would be difficult for students to come to their centres and take examinations. “Besides, who will be responsible if the students or their guardians get infected with coronavirus? There are lakhs who will be moving out of their homes for the examinations,” he said.

However, the northeast has not seen any protests so far. In the eight northeastern states, 53,235 MBBS (Under Graduate) aspirants and 21,236 engineering (JEE-Main) candidates would sit for the examinations in 148 and 23 centres, respectively.

But due to the Congress’s nationwide protests, its Assam unit too will participate while Communist Party of India-Marxist-backed Students Federation of India (SFI) is planning its own protest. But none of it has the assertiveness with which West Bengal, Maharashtra, Delhi, Chhattisgarh, and Jharkhand are opposing the move. The BJP’s dominance in the northeast partly explains the reason behind it.

But that is certainly not the case in Congress-ruled Punjab which has taken Mamata Banerjee’s suggestion very seriously. Punjab Chief Minister Amarinder Singh has asked his Advocate General Atul Nanda to coordinate with his counterparts in opposition-ruled states for filing a collective review petition in the Supreme Court, seeking a deferment of the NEET and JEE exams.

In a letter to the Chief Ministers of the four states Stalin on Thursday urged them to join the bandwagon of states approaching the apex court. He wrote, “…I sincerely request you to join in solidarity with the states and approach the Supreme Court on postponement of NEET and JEE exams for the greater good, as our united stand can help the voices of the students and parents across the country.”

As the political war is all set to be fought on two fronts — on the streets and in the courtroom — the BJP-led Centre is clear that there won’t be any further postponements.  (Agency)