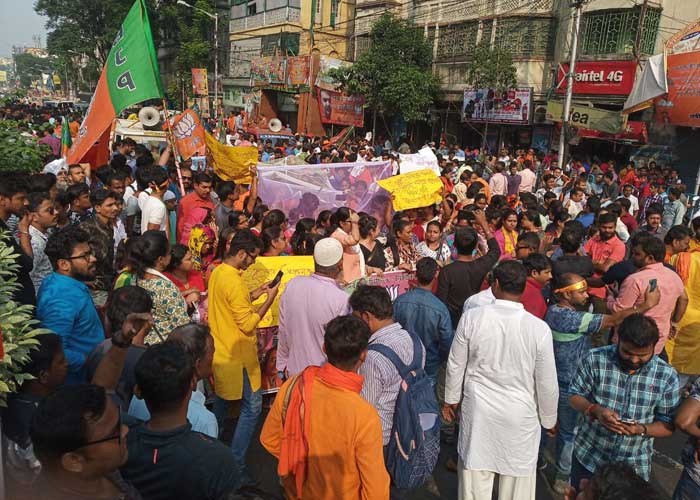 Police made a baton charge, lobbed tear gas shells and used water cannons to disperse hundreds of belligerent BJP youth wing leaders who tried to march to the Kolkata Municipal Corporation headquarters on Wednesday protesting against a host of issues including the civic body’s failure to control the Dengue menace in the city.

Bharatiya Janata Yuva Morcha activists flung water bottles, and threw stones at the police who had put up guard rails and steel barricade near Chandni Chawk in central Kolkata to prevent the agitators from reaching the KMC headquarters during the march, organised as a means of swaying public opinion months ahead of next year’s civic polls.

The protestors set ablaze tyres and tried to dismantle the barricade with sticks, rods and metal plates, as police personnel used their physical strength to protect it.

Some BJYM workers were then seen climbing the barricade, as a couple of them snatched sticks from police personnel after jumping to the other side of the barricade.

The police retaliated by wielding their sticks, and using the water jets on the protestors before lobbing tear gas shells and successfully dispersed them.

The BJYM later claimed 60 of their workers, including state President Debjit Sarkar were hospitalised after they were “mercilessly beaten” by the police. Thirty five activists, including a dozen women, were arrested.

A police officer said a number of security personnel were also injured.

Led by BJP state President Dilip Ghosh, General Secretary Raju Bandopadhyay, Sarkar and actress and BJYM leader Rimjhim Mitra, the protestors started off from Central Avenue, raising slogans against the civic authorities’ negligence in containing the spread of dengue in the city.

They carried posters and banners targeting state Chief Minister Mamata Banerjee and asking her to reply to the charge that the authorities were hiding facts about the vector-borne disease, which has affected 44,000 people in the state.

Ghosh, who participated in the march for some time at the start, accused the state government of issuing a firman to the doctors not to write dengue in the prescription.

“For the last three years, Dengue has emerged as a serious problem in Kolkata. When they couldn’t control the disease, they came out with a firman that doctors cannot write dengue in the prescription. The doctors were forced to write ‘unknown fever’ instead.

“The government tried to act too clever. It has only led to the spread of the disease. Even a KMC official has died from the disease. People are in panic,” he said.

Before he was taken to hospital, Sarkar alleged the police had “attacked the rally” without any provocation from his workers. “They rained batons, lobbed tear gas on our peaceful march. Heavens would not have fallen had we reached the KMC headquarter,” he said.

Mitra accused male police personnel of manhandling women BJYM workers. “Why did they stop us? We had permission to march further. The police acted ferociously”.

The BJYM also demanded a corruption free KMC, and a cleaner Kolkata, with less number of cable wires, posters and hoardings and better civic services.

The BJP, which has positioned itself as an alternative to the Trinamool Congress, is eyeing the Kolkata Municipal Corporation elections to be held mid next year. As per the results in the Lok Sabha polls earlier this year, the BJP was ahead in 50 of the 141 KMC wards.