Home National Pilot project to secure Pathankot Air Station to be replicated in all... 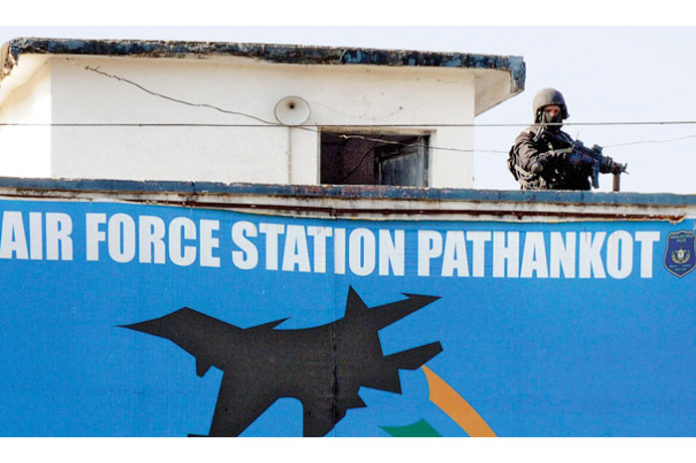 After the terror attack over three years back, a security apparatus is being put in place for the protection of the Pathankot Air Base in Punjab, which will soon be replicated at all Indian Air Force (IAF) stations across the country, Chief of Air Staff Air Chief Marshal R.K.S. Bhadauria said here on Friday.

His comments at a press conference came amidst intelligence inputs about the possibility of a terror attack on the lines of the one carried out at the Pathankot Air Base, which is close to the Pakistan border, in January 2016. Seven security personnel and six Pakistani terrorists were killed in intense gunfight after the attackers entered the complex by breaching the perimeter wall.

In the aftermath of that attack, the IAF has undertaken a pilot project to install an Integrated Perimeter Security System (IPSS) at the Pathankot Air Base.

“The IPSS programme is underway at the Pathankot Air Base. It is a pilot project which is running late by around two months. The pilot project will be completed between November and December. It will be replicated across all air force stations thereafter,” Bhadauria said.

A composite surveillance system, including video analytics through the use of a set of equipment and sub-systems in order to generate decision-making solutions, is the crux of the IPSS.

During the press conference, Bhadauria said that he will carry forward the legacy of the IAF along with progress through training, modernisation and indigenisation during his term in office.

In the prelude to the press conference, the IAF showed a video clip of the air strike undertaken on a Jaish-e-Mohammad (JeM) terror camp in Balakot deep inside Pakistan on February 26 in retaliation to the terror attack on a CRPF convoy in Pulwama in which 40 security personnel were killed.

The IAF chief said the video footage was only representational and not that of the actual air strikes.

Bhadauria, who took over as the Air Chief on September 30, said several steps have been taken by the IAF to augment its strength.

“These include mid-life upgrade of Mirage and MiG 21 jets. The Sukhoi 30 MkI will be upgraded. The MI-17 helicopters are being upgraded with glass cockpits,” he said.

“The IAF intends to carry forward the legacy of ‘Make in India,’ which will be its main focus,” said Bhadauria.

He said IAF’s contract negotiations with the Hindustan Aeronautics Limited (HAL) for acquiring 83 Tejas Light Combat Aircraft (LCA) is not complete yet, but will be signed soon. The prices of the aircraft are likely to go up, he said.

Regarding India’s plans to acquire fifth-generation aircraft, Bhadauria said the programme for Advanced Medium Combat Aircraft (AMCA) has been initiated.

“It has been given the go-ahead and has the full support of the IAF. There is no import plan yet in the foreseeable future. AMCA will be given priority,” he said.

He further said that the plan to acquire 38 Pilatus aircraft has been shelved while the order for HAL’s HTT 40 training aircraft will be decided after trials.  (Agency)