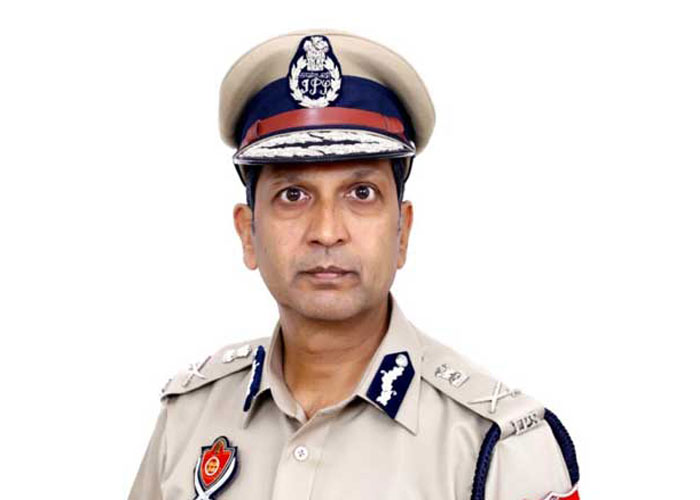 The entire 15-member team of the PGIMER that performed the plastic surgery on ASI Harjeet Singh, who lost his hand in the Patiala Mandi attack, has been chosen for the ` DGP Honour for Exemplary Sewa to Society’, along with Medical Officer Mansa and 70 police personnel on COVID frontline duty.

This was disclosed here on Tuesday by DGP Dinkar Gupta, who said in a significant departure from norms, it has been decided to honour the entire team of doctors, technicians and nursing staff of the Plastic Surgery Department of PGI, who performed the prompt and successful re-implantation surgery for over 8 hours on ASI Harjeet Singh on April 12, 2020.

Besides, Dr. Ranjeet Rai, Medical Officer, Police Hospital, Mansa has been chosen for the coveted `Honour and Disc’ for his significant role in contact tracing as well as quick sampling of COVID-19 suspects in Budhlada, said the DGP.

Apart from these, the DGP said that 70 Punjab Police officers of various rank across 27 police districts working on the frontline would be awarded. These include two ASPs, 22 DSPs, seven Inspectors, 13-Sub-Inspectors, nine ASIs and 17 HC/Constables.

Gupta further said that the said awardees had been selected for the second award list after meticulous screening and examination of the various nominations sent by the Commissioners of Police and SSPs to recognise the exceptional work done by Punjab Police and other officials working on the front lines of the COVID-19 operations and response activities in the state.

HC Jatinder Singh, who has emerged as one of the most active and popular Village Police Officers (VPO) of the State, is the VPO of village Muchhal, Sub division Jandiala (Amritsar-Rural). responded to a call from a lady in distress that her 3 days old newborn baby was in urgent need of medical attention and she didn’t have anyone to help her.

Jatinder, along with a village volunteer, rushed the lady and her child to an Amritsar Hospital in his car and facilitated her medical treatment. The video of this event went viral and his act won hearts all over Punjab. He has earlier motivated village volunteers to pool in their resources and distributed rations and meals to the needy. He has also facilitated holding of Medical camps in Muchhal village.

Ajay Gandhi, IPS, ASP Under Training in Bathinda, who is presently posted as SHO PS Maur in Bathinda district has been awarded for his sustained efforts to create awareness among the people of his area about COVID-19. He took prompt and effective steps to locate the NRIs who had arrived in his jurisdiction very quickly and got them medically screened.

ASI Jagtar Singh of Sangrur, after receiving a phone call from the family of pregnant lady namely Puneet Kumari w/o Vishal Pandit r/o Bihar (now based in Sangrur town) who was critical with a haemoglobin level of 4.5 g/dl. only at Civil Hospital, Sangrur. He immediately donated blood of the group which was not available in Sangrur at that time.

Sh. Amroz Singh, PPS, DSP (Airport) S.A.S Nagar was instrumental in ensuring the medical screening of all the foreigners who landed at Chandigarh International Airport. As the nodal officer for COVID-19 support and response for Mohali district, he worked tirelessly to coordinate with medical teams for on field testing, shifting of patients to medical facilities, contact tracing and home quarantine of all the foreign visitors.

Ms. Deepika Singh, PPS, DSP SBS Nagar, the Police nodal officer for COVID-19 of SBS Nagar district, enforced an effective lockdown of Pathlawa village when the first COVID case of the State of village tested positive. She prepared the Standard Operating Procedure (SOP) documents for the steps to be followed in the detection and surveillance of COVID-19 cases.

Head Constable Rohit Meelu, 977/R of Ropar district was effective in tracing medical screening of all the contacts of the COVID positive case village Chitamali (Ropar) on 4.4.20.

SI Arshpreet Kaur, SHO PS Jodhewal, Ludhiana was actively involved in devising a system for orderly operations at Sabzi Mandi Ludhiana, including implementation of social distancing measures. Even though she turned COVID positive on 17th March and is admitted in DMC Hospital Ludhiana, she is inspiring and encouraging the entire rank and file of the Punjab Police force through her powerful video messages.

Constable Lovepreet Singh of Amritsar City played a major role in ensuring the cremation of Bhai Nirmal Singh. Besides, has been serving the poor and the needy in a totally sincere and selfless.

Lady Constable Jindo Rani of Sri Muktsar Sahib district has been spending her salary since the last 2 months for providing rations to the poor and underprivileged people. She also rescued a poor lady recently who had suffered a paralytic attack and spent her salary on her medical treatment.

Heena Gupta, DSP Hqrs., Sri Muktsar Sahib organised health check-ups of underprivileged pregnant women and also took steps for distribution of fruit, iron and folic acid tablets to them. She was also involved in the distribution of 2000 sanitary pads in the slums.