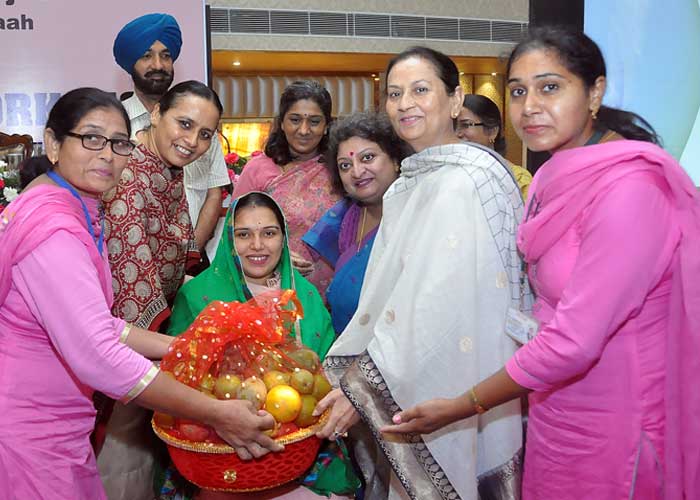 “A people’s movement is the need of the hour to spread awareness about good nutrition for mother and children in particular.” These views were expressed by the Social Security, Women and Child Development Minister, Mrs. Aruna Chaudhary here today during a State level workshop held by the Department in connection with the ‘Poshan Maah’.

Mrs. Chaudhary said that the celebration of ‘Poshan Maah’ at the National level is a very positive endeavour which needs to be transformed into a people’s movement to root out the menace of malnutrition.

The Minister added that a pregnant woman can give birth to a healthy child only if she gets a healthy and nutritious diet. If an expectant mother suffers from deficiency of any kind then the child is sure to suffer from malnutrition.

This would lead to many physical and mental issues and also result in inferiority complex. Giving a clarion call to make ‘Poshan Maah’ a success, the minister said she is for giving special care to pregnant women and newborn infants.

In her address on the occasion, the Principal Secretary, Social Security, Women and Child Development Mrs. Raji P. Shrivastava threw light on the objectives of ‘Poshan Maah’ and shared that the initiative commenced on 8th March, 2018 at the National Level.

She said that the clarity about the objectives to be achieved is absolutely necessary to make ‘Poshan Maah’ a grand success. The Principal Secretary shared some novel ideas to end malnutrition.

Elaborating on a five point formula to end malnutrition, the Principal Secretary also emphasized the creation of awareness through various forms of mass media on the significance of healthy and nutritious diet.

The Minister appreciated the work of the selfless foot-soldiers-the Anganwadi staff and said that their relentless endeavours and creative interventions have made supplementary nutrition efforts a success and have laid the foundation for a healthy state and a disease free population.

Various departments also presented their action plan on steps being undertaken to spread the message of importance of nutrition and healthy food, Defeat of anemia and defeat of diarrohea.

The Joint Secretary, Union Ministry of Women and Child Development Mrs. Anuradha Chagti in order to make this initiative echo in every nook and corner of the country, the training of anganwadi workers assumes great importance. She said that the initiatives of the State Government would surely work wonders in achieving the targets of ‘Poshan Maah’.

Addressing the representatives of all the stakeholder departments, the Mission Director, Mission Tandarust Punjab Mr. Kahan Singh Pannu said that Punjab is extremely rich in natural resources and the people must get the R.O.s installed only after getting the water tested. Sans any testing of R.Os, the people are drinking mineral less water which is causing physical and psychological deficiencies.

On the sidelines of today’s workshop was a traditional ceremoney ‘Suposhan Godbharai’ of Deputy Director (Administration) of the Social Security, Women and Child Development Department Damandeep Kaur and the felicitation of the designers of the departmental logo Shireen Hasnain and Anjali.

A booklet bringing into focus the various schemes of the department was also released on the occasion. Delegates contributed slogans and poems on the nutrition theme. A contest aimed at making traditional Punjabi recipes was also launched.