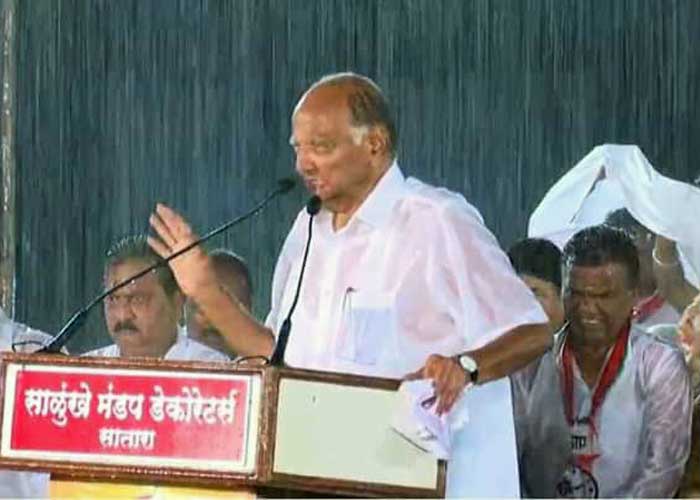 Stunning videos and images of Nationalist Congress Party (NCP) President Sharad Pawar addressing a rally here in pouring rain on Friday evening have gone viral on social media and accolades poured on him on Saturday.

The rally had barely started late on Friday when heavy rain started battering the venue, taking the organisers and the attendees by surprise, and some even contemplated cancelling the crucial public meeting.

But, undeterred by the sudden torrential rain, Pawar stepped to the dais and launched a blistering attack on the ruling Bharatiya Janata Party-Shiv Sena government in the Centre and state.

Senior party leaders on the stage, who initially fumbled, quickly settled down and even seemed to warm up to enjoy Pawar’s BJP-bashing in the lashing rain.

At times, the 78-year-old Pawar’s voice seemed to quiver as the shivering cold rainwater drenched his trademark white shirt and pants.

“This is Varun Raja (Rain God Varun)’s blessings for the NCP… It will lead to a ‘miracle’ in the state, and that wonder will start from October 21… I am confident,” said Pawar, making an emotional connect that was reciprocated with a thunderous applause overshadowing the raging thunderstorm.

Satara, an erstwhile royal kingdom is a crucial seat for the NCP which has a Lok Sabha bypoll and the regular assembly elections simultaneously.

In both, the NCP might is challenged by its former bigwigs — BJP has fielded sitting MP Udayanraje Bhosale for the Lok Sabha and Shivendraraje Bhosale for the assembly — both are cousins and descendents of the Maratha warrior king, Chhatrapati Shivaji Maharaj.

The NCP has put up Shrinivas Patil for the Lok Sabha and Deepak Sahebrao Pawar for the assembly seats, hoping to wrest them from the royal cousins and reinforce its influence in the region which falls in the prosperous sugarcane belt.

Currently, the NCP led by the state’s most influential political family hailing from Baramati in Pune, is facing rough political weather with the BJP openly threatening to “erase the Pawars’ significance” in the state by 2024.

Besides, Pawar with 55 years in public life, his daughter Supriya Sule, nephew Ajit Pawar, grand-nephews Parth Ajit Pawar and Rohit Pawar are in the electoral politics.

Though Parth lost the last Lok Sabha elections in Maval, Rohit is contesting the Karjat-Jamkhed assembly seat, and ‘Pawar Saheb’ is grudgingly credited for holding the entire Opposition flock together and in high morale.  (Agency)