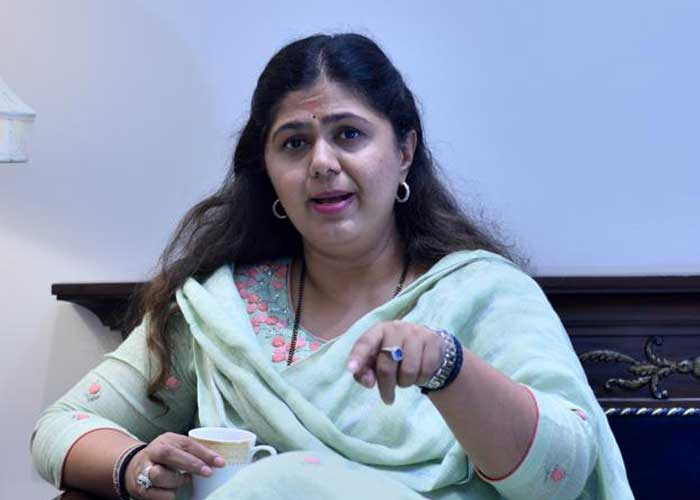 Categorically stating that she would not quit the Bharatiya Janata Party (BJP), senior leader and former minister Pankaja Munde-Palwe on Thursday launched a veiled attacked on the party leadership and even challenged it openly to sack her.

At a huge show of strength organised by her supporters to mark the 70th birth anniversary of her father, the late Union Minister Gopinath Munde, who passed away five years ago, Pankaja threw the gauntlet at her detractors and the party leadership alike, at Gopinathgad in Munde family’s stronghold.

“Loss in one election does not bother me. Circumstances are being created that I should quit. But I am not going to leave the party. However, if the party wants to ‘leave’ me, it can take a decision,” she said in the presence of several top BJP leaders, including state unit President Chandrakant Patil.

“I am being labelled as ‘ambitious’ who tried to ‘pressurise’ the party. Some are spreading the rumours that I want to be the Chief Minister. I never uttered any such thing. But is it wrong to be ambitious? Can’t a woman lead the state,” Pankaja demanded.

“I served as a minister for five years, but I am no longer a minister, not even a legislator, nor a corporator. From today, I am not even a part of the (BJP) Core Committee. They call me a rebel. Do you think (India’s) Independence would have been possible without defying the authorities or revolting,” she asked.

Dropping broad hints, Pankaja said that she was not angling for the post of state party chief or Leader of Opposition, but certain persons were creating a situation to push her and others like her out of the BJP.

She said that the party doesn’t belong to any single individual, but to all its workers, and it belonged to her father (the late Gopinath Munde) who helped build up the BJP in a big way in the state, as the gathering applauded.

Pankaja announced that on January 26, she would open her own office in Mumbai and the following day she would sit on a token hunger strike in Aurangabad to highlight the issues of water scarcity and others plaguing the Marathwada region.

Pankaja said she was extremely hopeful that Chief Minister Uddhav Thackeray will pay attention and resolve the long-pending problems afflicting the people of the region.

Later, she would embark on a tour of the entire state for an assessment of the ground-level political situation and other aspects, hinting that she would unshackle herself from the party’s discipline.

Another senior leader, Eknath Khadse, also slammed at their detractors within the party and the leadership for ignoring seniors like him who have served the organisation for nearly four decades, and for virtually ‘gagging’ them from speaking anything against the party.

Hoping to mollify them, state BJP chief Patil assured that the party, which had earlier warned that those found guilty of rebellion could be shown the door, will definitely examine their grievances.

“Why should you be angry with the party if you are annoyed with ‘someone’,” he asked gently, as both Pankaja and Khadse seemed to indirectly target former Chief Minister Devendra Fadnavis (now the Leader of Opposition), without naming him.

Ahead of the rally in Gopinathgad, Pankaja, Khadse, Patil and other senior party leaders held a meeting.

Thursday’s meeting was much anticipated after her December 1 emotional social media outburts and subsequent dropping of ‘BJP’ from her Twitter handle. This was follwoed by a flurry of meetings with party emissaries over the next few days to convince her not to take any drastic steps.   (Agency)