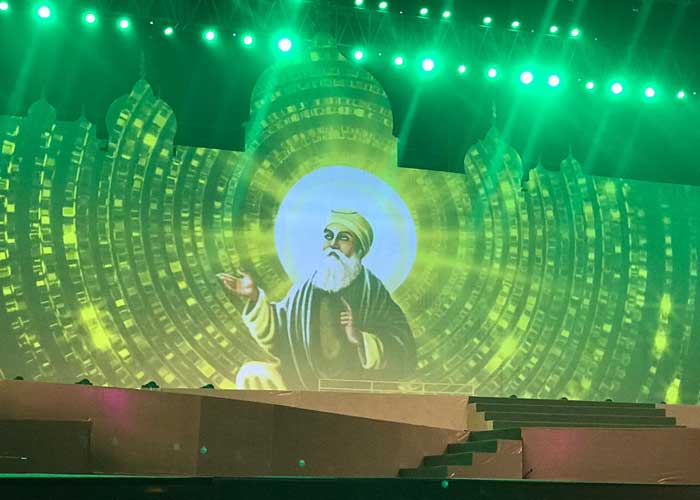 The spectacular light and sound show being organized by the Punjab government today got a massive response from the devotees as thousands of them today converged at the PUDA city ground to have a glimpse of the show, which showcases life and philosophy of Sri Guru Nanak Dev ji via ultra modern technique.

The show was a part of the commemorative events being organized by the Punjab government to mark the 550th parkash purb of Sri Guru Nanak Dev ji. During the show various events associated with the life of great Guru sahib were showcased beautifully through the light and sound rays. Similarly artists also gave their presentations related to the ideology of Sri Guru Nanak Dev ji in a befitting manner.

On the occasion, the Deputy Director Local Government Mr. Barjinder Singh and Secretary RTA Mr Darbara Singh were the chief guest of the show. In their address, they said that the Punjab government led by Chief Minister Captain Amarinder Singh was committed for celebrating the 550th parkash purb of Sri Guru Nanak Dev ji in an unsurpassed manner.

Mr. Barjinder Singh and Mr Darbara Singh said that this show was also a humble and befitting tribute to Sri Guru Nanak Dev ji, who had shown the path of peace, oneness of God, compassion and brotherhood to the humanity. They called upon the people to follow the path shown by great Guru sahib.

Later, renowned Punjabi singer Mr. Pamma Dumewal paid a musical tribute to Sri Guru Nanak Dev ji during the show. Mr. Dumewal regaled sea of devotees through his mesmerizing voice and connected the pilgrims with the life and teachings of Sri Guru Nanak Dev ji. Due to the melodious voice of the singer the entire atmosphere was imbued in spirituality thereby ensuring that people had a unique experience of the show.